What is a Fire Alarm System? 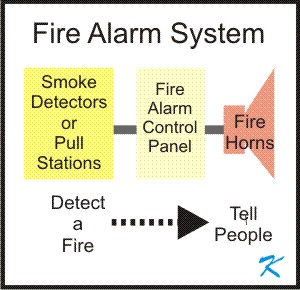 A fire alarm system is something that will detect fire and then to warn people of the fire.

Long ago, as an early method of spreading the word of fire danger, people shouted "Fire!" That was a fire alarm system. Depending on the circumstances, people would run away from the fire to escape, or run toward the fire to help extinguish it.

Later, to warn people to take action, the town bell or other noisemaker was also used. That, too, was a fire alarm system.

But, when there's no fire alarm system in the first place, or when all else fails, people still shout "Fire!"


Free PDF Excerpt from the book

How a Fire Alarm System Works

Once a fire is discovered by the fire alarm system, it tells the occupants of a building about the fire (by making lots of noise and flashing lights), and calls the fire-fighters (through automatic communication).

After that, it is up to the occupants to defend themselves from the fire, and the firefighters to try to extinguish it.

Because it's automated, other actions can be taken by a fire alarm system. It can:

Even without the other actions, the basic fire alarm system, through sound and light, tells people to take action. It is another means of shouting "Fire!"
Check It Out
Check It Out

Get a Free Diagram showing how a Fire Alarm System works
facpdoug@douglaskrantz.com
Share This With Friends: