What Should Anyone Look For in a Fire Alarm Panel?

A fire alarm panel should be easy to understand and to operate by untrained emergency personnel, like volunteer firefighters and replacement maintenance people. These people have to operate the fire alarm system during a fire, they can't look up an operation manual. 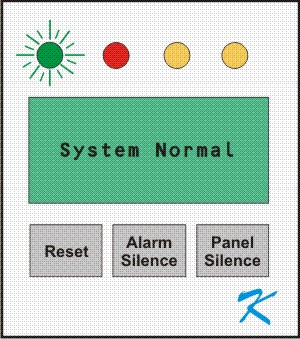 When the alarms are sounding, no one has time to find the instruction manual to operate the fire alarm control panel. If using the buttons is not obvious to the normal untrained person, it's too complicated.

The question has been asked, "Which is the best fire alarm panel?"

Which one is best has less to do with the brand and more to do with its operation.

Fire alarm systems are panic systems; between the immediate cause of an emergency and people wanting to know what is going on, the operator's attention is divided.

But when the alarm is sounding, operation of the fire alarm panel still requires the undivided attention by the person in charge; the panel has to be intuitive.

In determining which panel is best, it's the ease of operation by the owner or owner's representative, and by the fire department, that makes the difference.

In many places, through attrition, the managers and maintenance engineers of the building are continually changing jobs.

For the untrained replacements, in order for the fire alarm panel to be considered good, it has to be intuitive; no real training should be required.

Normally, no one does anything with the fire alarm system; it's just sitting there on the wall, at the ready. There's no real opportunity for the authorized operator to become familiar with it.

However, during a panic situation, the same person still has to read the panel.

Having this information readily available, without making the operator figure out which button to press during a high pressure situation, saves time and confusion.

Number of Buttons to Press

To start with, the fewer the buttons, the better. More buttons means more labels to read and more decisions to make during the panic situation.

To accomplish anything, when trying to operate the fire alarm panel, the ease of operation is determined by the number of required steps.

Beyond pressing the labeled buttons that say alarm silence and reset, each added step needed to silence or reset the system doubles the complexity.

To operate the fire alarm panel, the NFPA Fire Alarm Code requires a password or key. However, as far as passwords go, if the password isn't readily available, in writing, to the authorized operator, just adding a password will stop anyone who hasn't been properly trained. Without the password, the firefighters can't even use the panel when they're trying to fight the fire.

Having a key to unlock the buttons is an alternative to requiring a password, but the key can get lost. The advantage to a key, though, is that the firefighters will usually have one in their lock box at the entry of the building.

An Example of a Poorly Designed Fire Alarm Panel

To reset this one, 2 poorly labeled buttons have to be pressed in the proper order just to allow the 4 button password to be entered.

After entering the password, another 3 poorly labeled buttons have to be pressed. And again, that's in the proper order. Any mistakes and the operator has to start over.

In this case, even for those who have been trained in its operation, this panel is almost impossible to use.

When thinking about which fire alarm panel is best, the untrained person is the one that needs to be considered.
Check It Out
Check It Out