Index
Residential
Life Safety
Descriptions
Electronics
Maintenance
Suppression
When the firefighter's hat is lit up, a smoke detector has gone into alarm, stopping the elevator. By stopping and opening the elevator doors on a safe floor, won't be able to let people out of it on a floor that has a danger of fire.

The Elevator Stopped Working, Why? 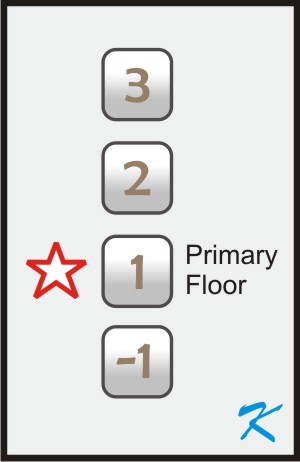 The star shows you which floor is the primary escape floor. You can choose which floor you want to go to in an elevator, except when smoke captures it to the primary or alternate floor.

Back in the early '70s, the disaster movie "Towering Inferno" depicted a fire in a high rise office building. Trapping partygoers at the top, the fire broke out in the middle of the building.

In an effort to escape down past the fire, some partygoers tried using the elevator. It stopped on a fire floor, opened its doors, and... Well, just leaving the results up to your imagination, the movie quickly changed scenes.

When escaping a burning building, sometimes people try to use the elevator. For their safety, though, the elevator may be stopped on the main floor with doors open; it has been captured and not usable.

This action (or lack of it) prevents the elevator from stopping on a fire floor.

When an elevator is captured (or grounded), it:

That's the floor people go to escape a burning building. In the United States, a star next to the button in the elevator shows the primary fire escape floor. When smoke is detected in an elevator lobby, this floor is the first choice of elevator capture.

Usually the first floor is primary escape floor, but, depending on the building, it can be the second floor, third floor, basement, or other floor designated as the escape route from the building.

If smoke is detected on the primary floor, as a second choice, the alternate floor is where the elevator lets people out.

Sometimes people find the alternate route harder to use, but, considering what happened in the Towering Inferno, that's better than the primary choice.

Smoke in the Elevator Machine Room

Smoke in the Elevator Hoist-way

Smoke should never be in the elevator shaft. If, however, a detector senses smoke there, because it can't tell what floor the fire is on, it captures the elevator to the primary floor.

All Other Smoke Detectors

These are many elevator lobby smoke detectors not on the primary escape floor. When smoke is detected in those elevator lobbies, the elevator is sent to the primary floor, allowing the passengers to escape in the best way possible.

This article only shows the bottom line of what happens to an elevator when it is captured by smoke.

The actual mechanism and wiring detail is different for each building, and isn't important to the discussion of the need for elevator capture. This is because when there is a fire, anyone caught inside the elevator is concerned only with what happens to them inside the elevator.

Bottom line, where there is smoke, there possibly will be fire. When the elevator equipment detects smoke, the elevator quits letting people enter, and it lets people off in a place without smoke, where they can escape the building.

In the end, elevator capture is all about safety; when there is a fire, how the capture equipment prevents people from being caught in the enclosure of the elevator car.