What is a Waterflow Switch?

A waterflow switch is a device that detects movement of water in a pipe. For fire protection purposes, if water is flowing, there must be a fire. 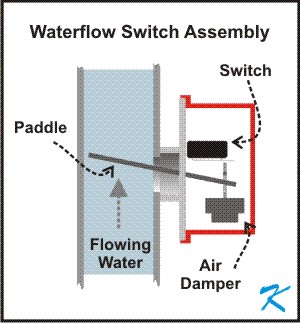 The Waterflow Switch is a mechanical-to-electrical Fire Alarm input device; it tells the fire alarm system that water is flowing in the sprinkler system.

The fire department reacts with more urgency to a waterflow switch alarm than the way they react to other alarms.

When the building sprinkler system activates, the waterflow switch has three main functions:

Reaction to the Sprinkler System

The fire department considers the fire sprinkler suppression system to be a greater indicator of a real fire than just the fire alarm system.

If heat has activated the sprinklers, and water is flowing in the building's sprinkler fire suppression system, they assume the building is actually on fire; the firefighters come into the building prepared for battle.

The waterflow switch is a mechanical/electrical assembly.

As it only detects the water flowing in the pipes, the waterflow switch doesn't turn on or off the water. It just sets off the alarms by activating electrical switches.

To detect the water's movement, the assembly has a paddle across the inside of the pipe. When water starts moving in the pipe, it pushes on the paddle. The paddle is on a lever that, when the water has pushed aside the paddle, allows a pair of switches to activate, after a time delay.

There are two switches inside to set off two alarm systems:
Although these waterflow-switches are robust devices, they cannot withstand the water-hammer from a sudden on-rush of water. Because of this, they are NOT to be used on Dry-pipe, Pre-action, or Deluge systems.

Delayed Signal from the Waterflow Switch

As the water pressure momentarily increases, water can move the paddle of the waterflow switch for a moment or so, and this movement could set off false alarms. This particularly happens as the city water pressure goes up and down.

To prevent these false alarms, the waterflow switch assembly has a retard control "Dial" that can be adjusted for varying amounts of delay. The retarder is an air damper that prevents the movement of the lever from the paddle from activating the switches until after a specified delay. This time delay is adjustable from 0 to 90 seconds.

Often from the fire alarm installer's point of view, the labels on the flow switch are not correct; so use an ohmmeter to determine which contacts are open when no water is flowing in the sprinkler system.

The waterflow switch is an alarm device. It sets off the building fire alarm system, and the fire department reacts to the alarm as if there is a real fire.