What are Lights and Buttons For on the Fire Alarm System?

The lights show you what's going on: Is there power?, Is there and alarm?, Is there something being supervised?, Is something in trouble? - - Using the buttons, you can acknowledge that you've read it, you can silence the alarms, you can reset the system. 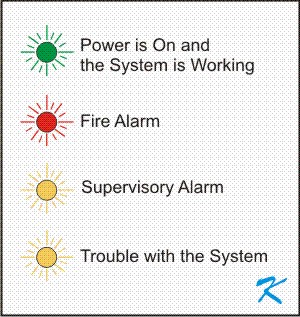 The green light indicates the panel has power and is working. The red light comes on when there is a Fire Alarm. Amber lights come on when a system the panel is Supervising is in Alarm or when there is trouble with the Fire Alarm System.

You're now in charge of the building, be it an apartment building, office building, business complex, or industrial complex and now you have to deal with the fire alarm system. What is it, what does it do, and how do you deal with it?

Purpose of the Fire Alarm System

First off, a fire alarm system detects fire and tells people to get away from the fire, helps control the spread of smoke and fire, and usually notifies a monitoring company to call the fire department.

A Fire Alarm Control Panel has lights to indicate its status:


Actions of the Fire Alarm System

Once a fire is detected, a series of events occur:

Get the Book Make It Work - Adressable Signaling Line Circuits

What Should You Do When the Alarm Sounds?

What should you do once these events start? At this point there are two possibilities:

You absolutely have to reset a red light alarm to return a fire panel to normal; a person has to be there to silence and reset.

You absolutely cannot reset a yellow light supervisory, trouble or monitor condition; the cause of the condition has to be repaired before the panel will reset.
Check It Out
Check It Out