How good are those Call 911 signs above pull stations?

Signs posted on the wall are soon forgotten about. When someone is fleeing for their life, they usually think that sounding the alarm is good enough. No one calls, but once the alarm sounds, everyone just stands in the parking lot waiting for the fire department. 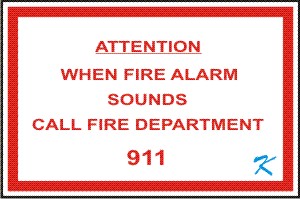 The sign over the pull station did say "Attention." The question is, "during an emergency, will a resident even notice the sign after going past it for years?"

The Fire Marshal didn't have the authority to require the owner to upgrade the fire alarm system to use off-site monitoring. Because the building didn't have any off site monitoring, above each pull station was a sign saying "Attention -- When Fire Alarm Sounds -- Call Fire Department -- 911."

Delayed Dispatching of the Fire Department

Any resident hearing the fire alarm was supposed to call 911. But when the fire alarm did sound off, the halls were full of smoke and the residents of this 8 unit apartment building weren't stopping to make phone calls; they were fleeing for their lives. The fire pretty much took all their belongings.

An even more burning question, when the halls were full of smoke and the residents were fleeing for their lives, could they remember to call 911?

Off Site Monitoring of the Fire Alarm

Those at the Central Monitoring Station (CMS) aren't near the fire so they don't have to run for their lives. From somewhere else, not on site, they professionally watch the building's fire alarm system. If the fire alarm system sounds off, they call the fire department on a timely basis.

As a method of redundancy, the residents should call 911 anyway. But when residents are fleeing for their lives, having the CMS call the fire department is the more reliable method.

Expense of Off Site Monitoring

Off-site monitoring for a small apartment building is a complicated and expensive proposition.

Most CMSs require monthly or annual charges, this is added to the cost of getting signals to the CMS in the first place.

In Addition: When deciding whether or not to monitor off-site, these cost factors affect the decisions made by the building owners. Sometimes it's considered just too expensive.

Cost to Residents -- The Money Question

The cost of monitoring -- using phone lines, paying the CMS monthly charge, and maintenance -- may well be $90 a month. This is easily the cost whether there are 8 units (like here) or 80 units. Of course, because landlords aren't made out of money, costs like this have to be passed on to tenants.