What is a Fire Alarm Klaxon?

A fire alarm Klaxon is a series wired sounder for a fire alarm system. Usually, there were several of the Klaxons wired as a circuit, if one of them had a broken winding, a trouble buzzer would sound in the control panel. The Klaxon use 59 Hz or 60 Hz power. It made a constant sound. 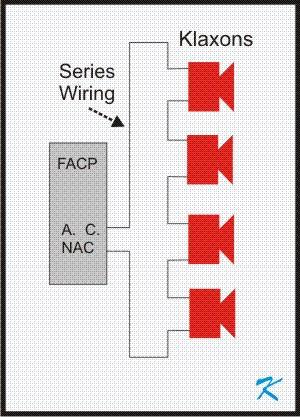 Klaxons are A. C. devices. They are wired in series and the Fire Alarm Control PaneL (FACP) is adjusted so its Notification Appliance Circuit (NAC) voltage is equal to the total added voltage rating of all the Klaxons on the circuit.

Before there were DC fire horns, and as an alternative to clanging bells, klaxons were used to notify people of fire alarms.

The individual klaxons operated on 3 to 24 VAC, and when activated, they gave a very loud continuous buzzing sound. The klaxons were extensively used before the 1970's, and some klaxons are still in use today.

One problem is that without DC there was no battery backup.

Bypassing most of the fuses inside the building, the trouble power source (to sound the trouble buzzer) was often AC from an emergency power panel. The emergency panel, however, still used the same power lines coming onto the property as the normal electrical power.


Get the Book Make It Work - Adressable Signaling Line Circuits
The input circuits were from manual pull stations, automatic waterflow switches, and automatic heat detectors. No smoke detectors could be used because, unlike the manual stations, a smoke detector requires DC voltages to operate.

The klaxons were series wired, so if any klaxon failed, or if the wire broke anywhere, the panel could sense the loss of supervision current and then sound the trouble alarm.

Giving different loudnesses, klaxons also came in various voltage ratings: greater voltage would mean a louder klaxon. The voltage at the terminals of any klaxon could not exceed the rating of the klaxon.

If all of the voltage ratings of a series string of klaxons didn't add up to 120 volts, the applied voltage had to be reduced so the klaxons would exceed their rated voltage. To reduce the voltage, a variac (an output voltage adjustable transformer - looks like a very large wire wound potentiometer) had to be used.

It may seem that this is just history, but because this history is still being used in some installations, we as fire alarm technicians still have to know about klaxons.
Check It Out
Check It Out