Which is Worse -- Fire or Water? 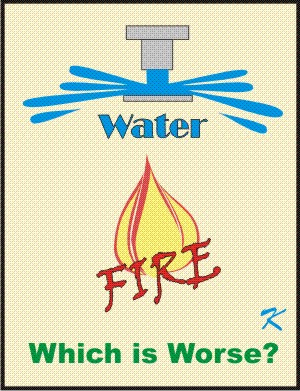 The balance between fire damage and water damage is often decided with the method of turning on the water. Will the water go everywhere, only where fire activates it, not be in pipes that can freeze, or not even be in the pipes until both the heat of a fire opens the sprinkler heads and the fire alarm system says there is a fire?

At some point a decision needs to be made, which is worse - the fire or excess water?

There really is a balance, when designing automatic sprinkler systems, between the destruction caused by fire and the damage from excess water used to fight the fire.

Because of this balance, several major types of sprinkler systems are in use: 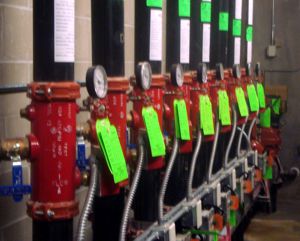 Wet Sprinkler Systems have water under pressure in the pipes at all times. The desire is to have water take care of a possible fire, but not to have water everywhere.

It's called Wet because at all times the pipes are "charged" or flooded with water; water is already at the sprinkler heads, ready to spray on a fire. In most places, this is the system installed.

When deciding on a wet system, the main concern is of the destruction from fire. The Wet Sprinkler System, though, waits for fire to activate it.

A plug, to keep the water from just spraying out of the sprinkler head, is held in place by a heat sensitive fusible link. When the heat from a fire breaks or melts the link, the plug comes lose and water sprays on the fire. 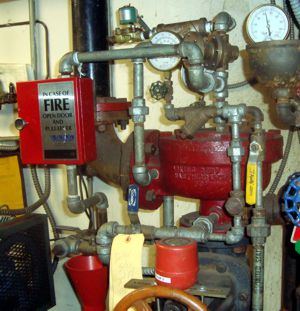 A Deluge Sprinkler System is meant to cover the whole area with water. Whereas water damage will be everywhere, the possibility of damage from fire far outweighs the possible water damage.

For the system to work this way, none of the sprinkler heads are plugged; to stop any possibility of fire, when water floods the pipes, the water comes out everywhere.

The Dry Sprinkler System uses air pressure in the pipes to hold a clapper valve closed so water doesn't flood the pipes. Usually this prevents freezing in cold areas.

Like the wet sprinkler system, to activate the dry sprinkler system heat from a fire melts or breaks a link. But instead of water coming out when the plug comes lose, air rushes out of the pipes. The air pressure then drops and the clapper valve is no longer held closed. Once the water floods the pipes, it sprays out to impact the fire at that location.

Preaction systems are deluge or dry sprinkler systems combined with a specialized fire alarm system. The "pre" in a preaction system is the preceding fire detection "action" of a heat or smoke detector.

The preceding action is required before water is allowed to flood the pipes in a preaction system.

The one interlock on the Single Interlock Sprinkler System is the preceding signal. Once the signal is received, the sprinkler system turns on the water and the water sprays.

Once in a while Sprinkler systems do stop fires. However, they can also accidently discharge water. They leak, accidently activate to release large amounts of water, even break and flood whole areas. The water could damage or destroy priceless antiques, computer server files, archival records, Etc.

The dry system alone would prevent water damage... except that the sprinkler system can leak air, the compressor that keeps the air pressurized could fail, even someone carrying a ladder through the area could accidently knock off a sprinkler head. These things do happen.

With that in mind, two actions have to occur for water to flood the pipes in the Double Interlock Preaction System.

The first Action is a loss of air. With air pressure keeping the clapper valve closed, the sprinkler is a Dry Sprinkler System.

The second action is that an outside signal is required to unlatch the clapper. Until the Preaction Valve receives the extra signal, that a heat or smoke detector has also detected fire, the clapper is locked closed.

The thought is that if there really is a fire, smoke or heat would be detected. Then a specialized fire alarm system could then release the latch. Only at that point, if the air is also let out of the sprinkler system, would the clapper valve open and the pipes be flooded.

There are variations to these types of systems, including the addition of foam, customizing the spray pattern, or misting the water, but these are mostly variations on the major types of sprinkler system.

Which type of system is used, Wet, Deluge, Dry, or Preaction really depends on what is considered to cause more damage: Fire or Water.