In fire alarm systems, a path is the route that signals and power travel between panels, and between panels and devices. The paths are classified by what happens when the pathway has a failure. 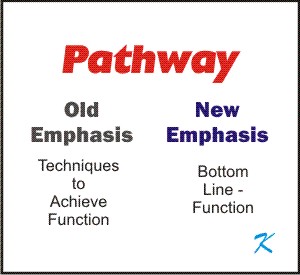 Rather than placing the emphasis on the techniques to achieve a Class or a Style, the NFPA is placing an emphasis how the pathway is going to function when things go wrong.

To start with, as a life-safety system, a fire alarm system detects fire and lets people know about the fire. That, though, is what the input and output devices do.

Between the input devices, the output devices, and the control system is the communication and power infrastructure; this consists of the signal and power paths.

In Greece, over 2500 years ago, near the small town of Marathon, there was a battle. After the battle, one of the winning Athenians ran all the way from Marathon to Athens carrying the news.

He ran along a path.

Nowadays, the message could be carried by a person running along a narrow mountain road, a verbal telephone call, a news story over the microwave towers, a data signal carried over fiber optics, Etc.; so may choices.

Because of all the different types of communication paths for fire alarm systems being used nowadays, the NFPA is addressing them all differently than they did in the past.

Communication Paths and Their Classification

Before looking at the correct way to send signals along a path, we'll look at the wrong way. To wire up a fire alarm system, an electronic technician (but one who's extremely lazy can use lamp cord laying across the floor and under the rugs. That technician might not even include a self-checking system to let the panel know when a device is no longer connected.

When this system is first installed, it'll work; it'll detect fire and let people know about the fire --- at least for a while. If the NFPA addressed this kind of wiring path, though, the Class of wiring would be "Class-Don't".

A pathway classification describes more than that. When describing a Class, the NFPA is concerned with is Reliability, Fixability, and Survivability.

Reliability - The NFPA wants to make sure the fire alarm system continues to work in the long run.

Fixability - The NFPA wants to make sure any problems that do occur are found and fixed on a timely basis.

Survivability - The NFPA wants to make sure the fire alarm system will continue to work when fixing it on a timely basis isn't good enough.

There are three things considered by the NFPA with the carrying of the signals on the fire alarm system paths:

The Classes of the Paths are performance designations. Rather than describing how to build and use the communication paths (the NFPA is not a "How-To-Do-Anything-Book"), the NFPA uses Class types to describe what should happen in a fire alarm system along a path when things go wrong.

The following descriptions show briefly the minimum requirements of each Class.


This is annoyance supervision - people get annoyed when things don't work right and they want the system fixed.

Example of a device going into fire mode when a wire breaks or a signal is lost:

This is basically local Ethernet, Token Ring, or other network or IP infrastructure.

In order to be proper classified as Class A or Class X, the outgoing and return path routes for both Class A and Class X have to be separated by a certain distance; the two paths cannot be inside the same conduit, for instance.

The Class of the Path

Overall, the path used in a fire alarm system between devices and panels has become more of an idea than a specific type. The Class of the path is considered to be the quality of the path: the reliability, the fixability, and the survivability of the path.

I really, really recommend purchasing the "NFPA 72 National Fire Alarm and Signaling Code Handbook". It has the complete official NFPA Code, and included along with the Code are lots of explanations about what the Code means.

Yes, the Handbook is more expensive. However, to get an understanding of what is meant by the legal terms shown in the codebook, the added explanations are worth much more than the extra expense.

The Handbook is available in hardbound, in softbound, or even in electronic form for desktop or mobile devices on the official NFPA website --- https://catalog.nfpa.org
Check It Out
Check It Out