How Does Conventional Class A Fire Alarm Wiring Work? 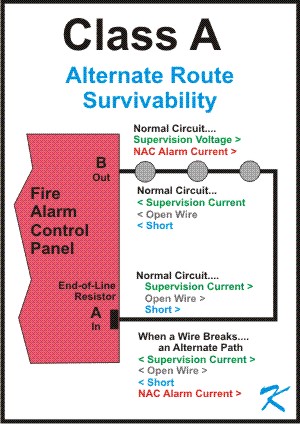 During fire, if a wire breaks, Class A Wiring provides an alternate route for signals to pass between field devices and the fire alarm panel.

Class A or Class B wiring loops help the fire alarm panel to find and fix these breakdowns (faults) before a fire, while there is time for repairs.

Normal Class B wiring - All devices are supervised and working.

In conventional Class B Loops, all devices are daisy-chained together. By watching a small electrical current passing through the wires, the panel supervises them, and to limit this supervising current, at the end of the daisy-chain is an end-of-line resistor. The panel constantly watches for this current.

Open Fault in the Class B wiring. Supervision tells the panel that the wiring does not go through, but also the devices further from the panel don't work.

If the supervising current stops flowing, the panel assumes a wire is broken (an open fault), and displays a trouble. When a wire breaks in Class B, the devices closest to the panel will still work, but because of the wire break, the devices further from the panel are cut off.

Normal Class A wiring - All devices are supervised and working.

Under normal conditions, Class A Loops are similar to Class B Loops, but with an important difference.

Class A wiring takes error detection further than Class B. If a wire breaks, the panel uses a redundant wire path to maintain communication with devices beyond the break. Here even though a wire is broken, all devices work.

To keep more devices working, Class A uses a second path from the fire alarm panel; a redundant wire loop goes around the broken wire. A fire can still be detected, because, using this redundant path, most, if not all, devices on the loop remain connected to the panel.

Basically, when the fire alarm panel detects an open wire in the Class A Loop, it automatically switches to using two separate un-supervised Class B loops. The first one is the original Class A loop, and second one back-feeds on the separate pair of wires to make the second Class B loop.

Most of the devices on the original Class A loop will be on either the first or the second Class B loop.

Separation on Class A Wiring Routes

The question is asked: In Class A wiring, how close to the feed wires are we allowed to get the return wires?

The answer is: It depends. During a fire, as the fire damages the wiring, how badly does one want the fire alarm system to continue to work?
True Class A wiring schemes make sure to protect the redundant return path by routing it through the building on a separate route.

The concern here is that whatever breaks a wire in the first part of the loop might break all the wires in the same bundle. An example: A forklift tears through all the wires in a bundle at once. If both feed and return wiring routes use the same wire bundle, and the whole bundle of wires is broken, and all the devices beyond the break will not communicate with the panel.

In that case, Class A wiring will not be any better than Class B.

The NFPA Code does allow for some exceptions, but mostly the code says the outgoing wiring path and the incoming wiring path should be separated by some distance.

Most fire alarm panels automatically restore trouble messages when the trouble is repaired. However, because the Class A Loop isn't supervised the same way as Class B Loops, the fire alarm panel can't detect corrections.

With Class A faults, after correcting the open fault, resetting the panel will clear the trouble message.

Bottom Line for Class A

When a wire breaks, by using both paths, devices are still able to communicate with the fire panel.