Why Use Class A to Network Fire Alarm Panels Together?

A fire alarm system detects fire and warns people of danger. A fire is not predictable, so an alternate (redundant) signal path may be needed in case fire damages the main signal pathway. 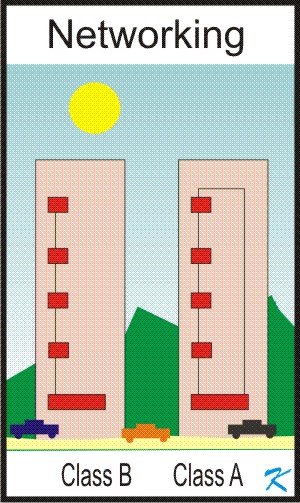 The evacuation of a tall building has to be done in stages to allow those closest to a fire to get into the stairwells. The fire alarm network has to survive long enough to make sure all the occupants are notified and can escape using the long stairways. Class A provides better survivability than Class B.

In a tall building, should the network connecting the fire alarm panels together be Class B, or Class A?

Often on each group of floors in a tall building there's a fire alarm panel. So all the panels can talk to each other, Class B networking connects all fire alarm panels together in long daisy chain.

Usually the main panel is at the bottom in the fire command room, and the daisy chain carries signals from the bottom to the top, stopping at each panel along the way.

Often this wiring goes through the same set of rooms as the electrical riser.

Starting at the panel in the fire command room, this daisy chain wiring is sometimes called the "Network Feed."

Class A networking uses this same method to connect the panels, but it has an extra return path for the signals. Using a route through another part of the building, this return path connects the top panel to the bottom panel.

The NFPA Code specifies the minimum distances between the network feed and the network return paths.

Is Maintenance an Issue?

The thing is, any fire alarm network system, whether it's Class A or Class B, is maintained so that if there's a problem, the system is fixed.

Instead of maintenance being the issue, the purpose of installing Class A networking is to insure survivability.

Fire Alarm Survivability During a Fire

Class B wiring assumes the network will always be able to carry signals all along the entire daisy chain. That's fine if a fire stays away from the alarm network.

Class A wiring assumes that sometimes, with a disaster or fire, network signals passing through the daisy chain are interrupted; the chain is broken.

Even with this signal interruption, Class A wiring has an alternative route to get the signals through. To get past the interruption in the Class B network, it uses the return path for the Class A network to carry the signals backwards to all the panels on the far side of the break.

Routing for the return network path, though, is an issue.

The NFPA Code does indicate what's allowed. These allowances, though, are what to use if the signals for the Class A network can't be sent through the building using the best route.

The best way, of course, is to route the Class A return loop through a different part of the building than the feed. This is in the hopes that disaster or fire isn't so big that it cuts off both the feed and return loops at once: leaving the occupants above the break to their own devices.

Survivability of the Fire Alarm System

Yes, fire alarm systems show an amber light when there is a problem. That's when the building owner calls the service technician to fix it.

But with the fire alarm network wired as Class A, so the return path is in another part of the building than the feed, there is a greater chance the whole fire alarm system will function in case of fire, even if some of the wiring is destroyed.