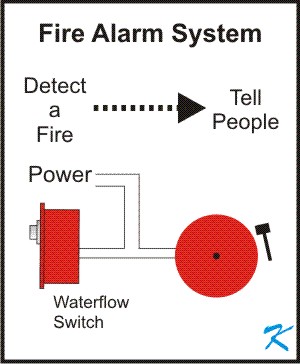 It's the Fire Alarm Control Panel or Annunciator that's visible, and to the customer, the heart of the fire alarm system.

When one gets down to it, the early fire alarm control panels didn't really control anything. They only detected trouble with the wiring and they provided power to the devices.

The firefighter's outside horn/strobe doesn't have a control panel. It doesn't even have anything to detect if the power is turned off or a wire is broken. It's really, though, a complete fire alarm system. (Some people might not consider this as a fire alarm system. However, when heat from a fire is detected by a sprinkler head, water starts to flow, and the outside horn is turned on to announce a fire.)

Just to see how important parts of a system really are, sometimes I play an intellectual take-away game; mentally I take away parts of a system, one at a time. Because this is a mental exercise, one can play with ideas and doesn't have to depend on real facts or circumstances.

Starting with the fire alarm control panel, take that away and see what happens.

OK, the Fire Alarm Control Panel does supply power. On the other hand, so does a plug-in power supply.

There's at least one fire alarm manufacturer of addressable fire alarm systems that has a worst case scenario default. In case their fire alarm control panel's processor fails completely, so no data is received or sent on the Signaling Line Circuit (SLC), when the detectors detect smoke or a manual station is pulled, the horns and strobes still sound off. (I've seen this default working.)

In other words, for that manufacturer's Signaling Line Circuit, if the SLC only provides power, the system will still detect fire and sound the alarm. Even when the fire alarm control panel completely rolls over and dies, all that's absolutely needed is a plug-in power supply.

True, this really works only in small fire alarm systems, and most manufacturers' fire alarm systems don't have that as a worst case scenario default (they should get on the bandwagon). However, this mental exercise does show that the control panel isn't always absolutely needed.

Take Away Anything Else

On the other hand, take away the detector and the rest of the system is useless.

The same with the devices used to let people know about the fire (fire horns, etc.). Take them away and the system is silent.

Or remove the wiring connecting all the devices together, and in case of fire, nothing happens.