What is Conventional Class B Wiring?

Like beads on a necklace, the devices on a Conventional Class B Circuit are wired one after another. There are no T-taps. If a wire breaks or comes loose, there isn't an alternative path, so the devices beyond the break are no longer connected to the panel. 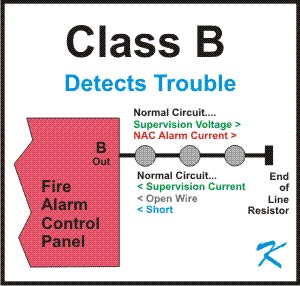 Class B Wiring is meant to make sure that the wires are always connected to all the devices on the loop outside of the panel.

Fire alarm people are paranoid. They're afraid everything is working against them. They're in fear that that if anything goes wrong, like a wire breaks or a connection comes loose, lives will be lost, or property will be destroyed, or both.

Wiring, for example, is considered to be unreliable. Even when installed perfectly -- it's in conduit and all connections are properly made -- wiring can be damaged by external forces: a smoke detector is broken by a forklift, a mini-horn is disconnected in an apartment so the resident doesn't have to listen to it, a connection is corroded by water leaking from the roof, etc.

This of course doesn't include poorly made connections, squirrels chewing on the wire (I've seen that), other vendors removing the fire alarm wire by mistake, and anything else that breaks the wire.

That is why fire marshals and other Authorities Having Jurisdiction (AHJ) want any problems fixed early; once a fire starts, it's too late to troubleshoot and fix the fire alarm system.

To make sure the wire throughout the building is always working, the wire is supervised, or continually checked for continuity, by the fire alarm control panel using a small electrical current.

The current, as it leaves the panel, goes out one of a pair of wires, goes through a current limiting resistor called an End-of-Line resistor (EOL), and returns on the other wire. This pair, along with the EOL, makes up a fire alarm loop. Devices are connected to this loop so their connections, also, receive the supervision current.

If this current stops for any reason, the supervision circuitry in the fire alarm panel assumes that the whole loop is not working, and calls out a trouble condition. The trouble condition on the panel, of course, cannot be reset; the cause of the trouble can only be fixed.

Besides the devices themselves being connected, there are no "T" taps; no wire runs to another device not supervised by this loop. This includes short runs within a box that doesn't run the supervision wire through any devices on the loop.

Class A Loops can be used in fire alarm systems, but Class B Loops are the most common for non-addressable fire alarm loops.