Why All the Contacts on a 4 Wire Duct Detector? 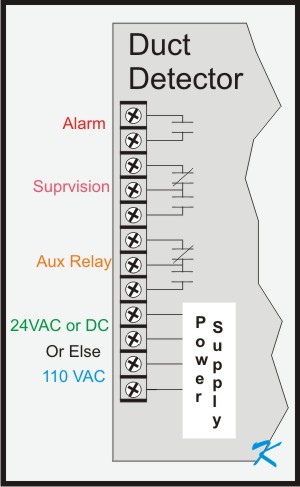 OooooooooooooK, There's a lot more than 4 wires, but only 4 wires are really needed.

Conventional Air Duct Smoke Detectors are assemblies that include a smoke detector, support electronics, and an internal power supply. The minimum requirements for a conventional duct smoke detector are four wires.

By shorting the IDC (Initiating Device Circuit), two of the wires are for sending the alarm to the fire control panel on the conventional input zone.

To power the detector and the support electronics, using the other two wires, the duct detector receives power from the HVAC air handling unit it's attached to, or from the fire alarm control panel.

Installed to sense smoke, a duct detector is a smoke detector in an air duct. Once smoke is sensed, to prevent the air handlers from spreading the smoke throughout the building, the smoke dampers in the ductwork are closed and the air handling fans are shut down.

Because the air handers aren't always on and circulating air, duct detectors are not considered to be life safety devices; if the air handler is off, no smoke will be sensed.

In the assembly, the duct detector itself is just a regular smoke detector (sometimes with modifications), and doesn't use much electricity.

The support electronics has at least two relays. One of the relays, the alarm relay, is rather hefty. It's needed shut down the air handling fans and dampers.

Indicating that something is wrong with the duct detector, that the power is lost, or that the cover is off, a second relay sends a supervision signal to the fire panel.

Besides relays, the electronics usually include test and reset circuits for the assembly.

Because of the added current needed to run the support electronics and relays, a conventional duct detector assembly is power hungry.

To power everything, a duct detector assembly often has choices of:
These are the other two wires on a four wire duct smoke detector.

The air duct smoke detector is a four wire smoke detector, with extra contacts. So the detector can send in its alarm, two wires are for the input loop of the fire alarm panel. Providing electricity to the assembly's electronics the extra two wires provide power.