Can a Magnet Really be Used to Test a Smoke Detector? 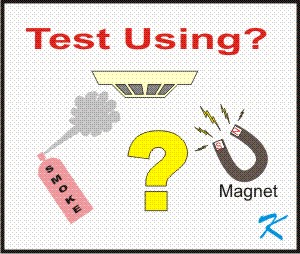 Yes, many manufacturers install magnet testing switches into their smoke detectors. The question is, which should be used for function testing of a smoke detector... Smoke or Magnet?

Smoke detectors usually have two ways of being tested. Smoke (smoke particles in the air, or some sort of canned smoke), and magnets (the activation of an internal magnetic reed switch).

Magnet Testing is Good For Testing the Fire Alarm System

Determining if the electronics of a smoke detector go into alarm and what the fire alarm system does with the alarm can be done with a magnet test.

Activating with a magnet determines whether the rest of the fire alarm system will cause: The problem is that the magnet test can't determine whether or not the smoke detector actually detects smoke.

Royal Chew Out over Magnet Testing

Most Fire Marshals view smoke in the chamber to be the only test of a smoke detector.

One time though, a fire marshal chewed me out because the smoke detectors installed by our company were not capable of being tested using magnets. He said that magnets were better for testing because those doing the testing (like me) could pump in as much smoke as we wanted for function testing, and by implication we would not get an accurate test. The opinion of that particular Fire Marshal was the magnet test is a calibrated test to determine if the smoke detector would function correctly.

A few months later, with that chewing out still ringing in my head, I was at an older apartment building I had never been before. Previously, magnets had been used to test the smoke detectors. I decided this was a good place to see just how well a magnet would test them.

Wanting to make sure I knew what was happening, I sprayed a tenth of a can of smoke on that one detector; the smoke detector still did not activate. The smoke detector passed with a magnet but failed to detect smoke.