What is a Flyback Diode?

A flyback diode isn't a specially made diode, it's a regular diode placed next to an inductive device like a relay or door holder so the diode will protect the rest of the electrical circuit from the inductive device. 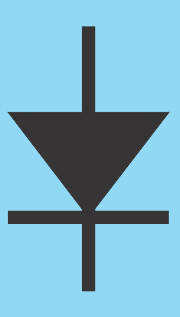 It's next to a DC Relay. What is it, and why is it there?

Someone Thinks the Flyback Diode is Important 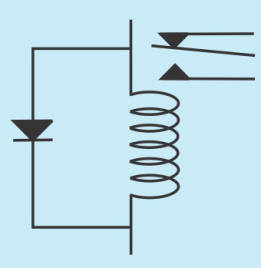 A relay consists of an electromagnet and a moving armature. As it moves, the armature opens or closes electrical contacts (make or break contact).

Manufacturers all over the world spend good money installing these diodes, they must think they're important. 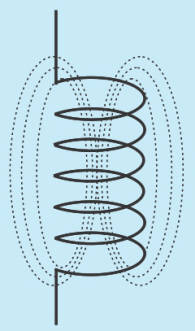 Moving electrons in a coil of wire produce magnetism and it's the magnetism that pulls the armature.

To understand why the diode protects, let's look at the inner workings of the relay, which we can think of as electromagnet.

Voltage, an electrical force, pushes and pulls on the electrons

When the relay is first turned on, voltage (electromotive force or EMF) is applied to the ends of the coil.

Think of a train consisting of boxcars (electrons), and small locomotive engines (electromotive force) between each of the cars. The atoms making up the wire can be considered as the tracks guiding the train. 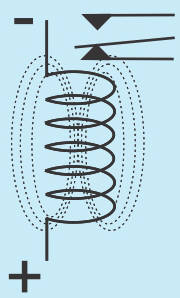 As the electrons travel, they put energy into creating a magnetic field, pulling in the armature of the relay.

Intuitively one would think that ending the applied voltage stops the current like a water faucet, releasing the armature.

It's Not That Simple 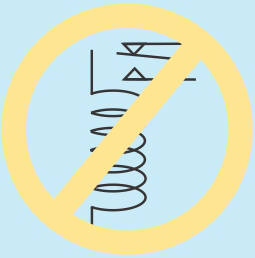 It's a two way street. Moving electrons create a magnetic field; a changing or collapsing magnetic field moves electrons. In other words, the electrons, like the momentum built up in a moving train, can't just be stopped.

According to the First Law of Thermodynamics, energy cannot be created or destroyed, it can only be converted.

The Magnetic Field is Still There

We converted electrical energy into building up the magnetic field; the energy is still there, even after the electromotive force (voltage) is removed.

The Collapsing Magnetic Field is a Generator 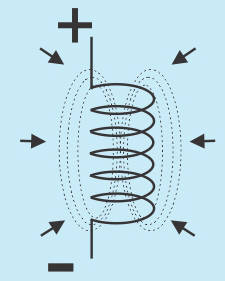 When the voltage is turned off, because the electrons are starting to slow down like railroad cars coasting to a stop, the magnetic field starts to collapse.

The Magnetism Creates Its Own EMF 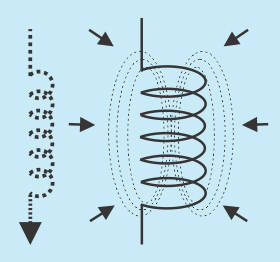 Power is fed back into the train. The generated electromotive force produced by the collapsing magnetic field is like turning on the train locomotives again. Enough energy is given back to electrons that their movement will keep up the magnetic field.

The electrons don't just stop: the collapsing magnetic field puts its energy back into an effort to keep the electrons moving. It generates electromotive force in the coil, giving the electrons some extra push.

The voltage produced by this generator can be hundreds of volts; it will be whatever it takes to keep the electrons moving. This can be quite an electrical shock, even when the original voltage was only 12 volts.

This voltage can be seen on the terminals of the relay coil as a short term, reverse voltage spike.

Even when the turn-on voltage was only 12 volts, the generated spike can be hundreds of volts.

The Quicker the Turn Off, the Greater the Voltage 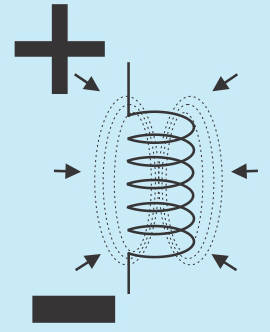 This is how the coil in a car works. Inside the coil, the magnetic field collapses fast, generating the 50,000 volts needed to jump the gap in the spark plugs.

The quicker the electrons are stopped, the faster the magnetic field collapses; and the greater the generated voltage spike keeping the electrons moving.

Something Has to Give 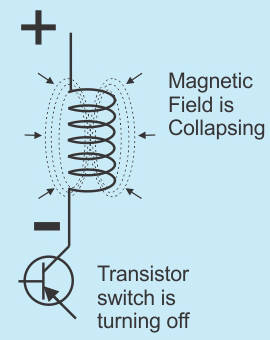 Inside an electronic circuit, this voltage will appear on the terminals of the relay, and from there be applied to the rest of the circuit.

This voltage is going to be passed through the circuit to whatever is stopping the current. 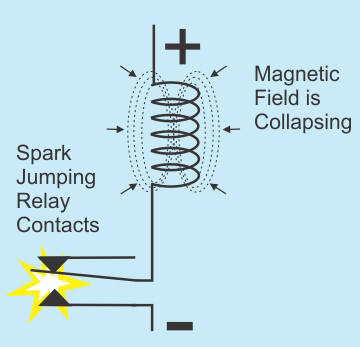 The voltage in the electromotive force causes electrical current to jump gap in the switch contacts that originally turned off the current. This sudden short-term surge of current will also produce electromagnetic interference (EMI), interfering with other parts of the circuit and possibly this EMI will be transmitted to nearby electronics. 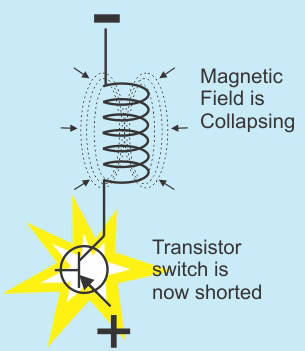 This jumping-the-gap is hard on semiconductors; their fragile junctions are no match for the high voltage of the relay's electromotive force.

Semiconductors get little sparks too, which punch holes through the junctions.

What Can Be Done About This Voltage Spike? 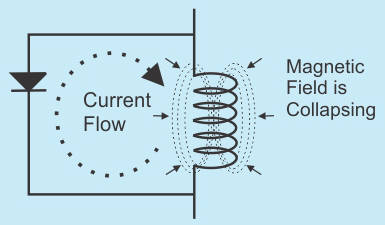 The flyback diode keeps the electrons moving by shunting them back into the relay coil. Because the electrons keep moving, the collapse of the magnetic field is slowed down, and the generated voltage will be much lower. Switch contacts and semiconductor junctions can easily handle these lower voltages.

The flyback diode, as a snubber, keeps the current flowing through the coil...

By shunting the current back into the coil, the diode shorts out the voltage spike.

Doesn't the Diode Normally Short Out The Whole Circuit? 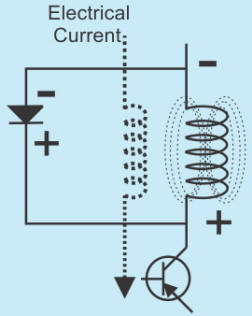 The diode, as installed, is reverse biased. It will not conduct when the relay is turned on. There is no short circuit and no energy is wasted.

Normally, when external voltage is applied to the coil, the flyback diode is reverse biased and will not conduct any current. 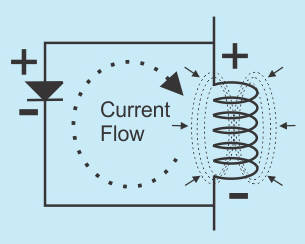 During the brief turn-off time of the relay, when external voltage is removed, the diode is forward biased to keep the transient voltage spike to a minimum.

The Flyback Diode Protects the Circuit 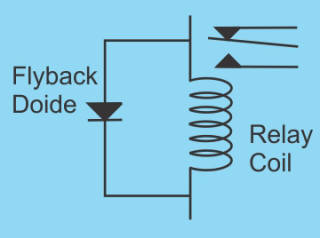 The flyback diode is a snubber, reducing the impact of the voltage produced by the collapsing magnetic field of the relay coil.

The reason manufacturers install these diodes next to DC relays is because at turn-off time, as the magnetic field is flying back, the flyback diode protects the circuit, and its components from the relay's damaging voltage spike.