To make sure that the wires that carry power to the horns and strobes are continuous and not broken or loose from a connection, the wires are checked for continuity by the fire alarm panel. The panel uses continuity to supervise the wires of the Notification Appliance Circuit. 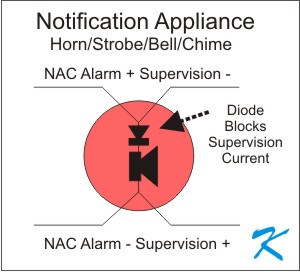 Supervision is the normal, non-alarm, state; the devices aren't powered. The wires connecting all the devices to the panel are supervised (continuity tested) or watched to make sure they haven't been broken or lost connection. If the conventional fire alarm system is wired correctly, that means that the devices are all still attached.

In the supervision state, a low power electrical current is passed through the entire circuit and either goes back to the panel (Class A) or goes through an end-of-line resistor (Class B). If a wire breaks, a connection comes loose, or there is a ground fault or a short, the panel will indicate a trouble.

The panel is supervising the wires because:
In the alarm state, the fire alarm system is getting people's attention. All the devices are powered to make noise or flash. The NAC wires from the panel are carrying the power to all the devices.

Current Blocking Inside the Notification Appliances

Fire Alarm Speakers are also Notification Appliances. The speakers, though, are a little different. Instead of the blocking diode, there is a Direct Current (DC) blocking capacitor. This capacitor prevents the NAC supervision DC from getting into the speaker, and it also prevents the speaker from shorting out the DC supervision of the NAC. The capacitor does, however, allow the alternating current (AC) of audio signals to get to the speaker.

Fire horns, Strobes, Bells, Chimes -- In the alarm state, the supervision is switched off by an internal relay and 24 volts is applied to the NAC, powering the devices. This voltage is in opposite polarity to the supervision voltage, so the diode that blocked the supervision current from getting to the device, now conducts the current into the device to operate it.

Speaker Audio -- In alarm, the speakers don't get this 24 volt DC power. Instead, just like any distributed sound system, the speakers are given power in the form of 25 volt or 70 volt audio, which is AC. The capacitor, that blocked the DC current in the fire alarm speaker, now has AC current which is passed on to the speaker.

The switching between supervision and alarm power is usually done inside the panel using a relay. It physically switches between the supervision of the wiring and the riser power, activating the attention getting Notification Appliances.
Check It Out
Check It Out