How Are Fire Alarm Loops Supervised?

A fire alarm system has internal checks to make sure everything works to detect fire an warn people of fire. It calls out a trouble alarm when a wire breaks or when an input device or output device fails. 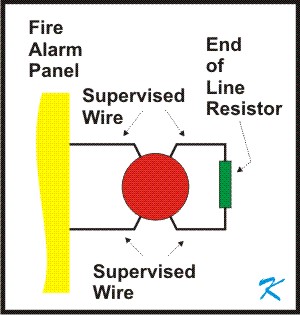 For signal communication outside the panel, Fire Alarm Systems use Loops of Wire. Because this is a Life Safety System, the Loops are Supervised to make sure the wires and connections are always secure.

Example: To make sure the wiring is supervised, the wires are installed in the form of loops, according to strict standards, designed specifically for fire alarm systems.

In a fire alarm system, a loop is a pair of wires. It carries power and signals between the circuit boards inside the control panel and the off-panel devices in the field.

The loop:
By Douglas Krantz

The IDC is a pair of wires without t-taps, connecting the panel to the input sensing devices.

Wired similar to the IDC Class A or Class B loop, the NAC carries power to operate the "Notification Appliances": In alarm, the voltage on the loop is forward biased; the electrical current provided by the panel goes through the notification appliances, letting people know about the alarm. They are notified.

When the fire panel goes into alarm, the panel stops supervising the loop and changes the voltage polarity to normal. Electrical current then goes through the devices, causing the devices to notify the occupants of the building.

The SLC also provides a small amount of power to operate the field devices.

Field Devices Connected to an SLC To supervise the SLC and to make sure all devices are always connected, the panel sends data to each input or output device, polling the device and asking "are you there"? The device then answers by returning data to the panel saying "I am here."

With the constant polling of the field devices, the need to supervise the wiring itself isn't necessary; the "Class B" SLC may be t-tapped.

As well as the polling of the devices, Class A SLC loops are not t-tapped and are still supervised for wiring issues.

The control circuit, usually from an on-board relay in the panel, turns on or off devices and systems.

The on-board relays can also be used as part of another panel's IDC loop, sending alarm, supervisory, and control signals to that other panel. This is particularly useful when the fire alarm panel itself doesn't have an on-board communicator, to provide for off-site monitoring.

The actual wiring may be a little different from the standard IDC, NAC, and SLC loops, but the control loops still have to be supervised for integrity.

Some of the uses for the on-board relays:

All wiring outside in a fire alarm system, whether it's an IDC, NAC, SLC, Power or Control loop, needs to be supervised, and supervision includes the call for service and repair of the system, once the panel indicates trouble with the system.
Check It Out