Why Aren't There a Lot Of Troubles When Removing Wires? 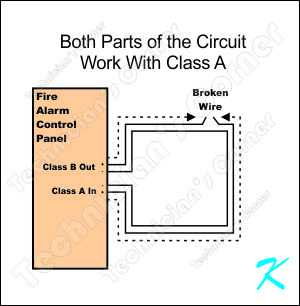 Style 6 or Class A circuits have an extra (redundant) means of communication. Both ends of the loop connect to the panel so if a single wire breaks, all of the devices are still connected to the panel.

I have a question about a fire alarm circuit and I hope you will help me out.

When I remove one positive wire from a smoke detector, I don't see it and any other loop devices missing in my trouble log, except the device I took off and a Style 6 Loop trouble.

My question is, shouldn't I get a list of all devices which are connected in loop? For example, if I remove one positive wire from the Loop 3 smoke detector Number 34, I am receiving a "No Response Smoke Detector 34" and "Style 6 Loop3 Trouble" Why am I not getting a list of all of the devices that are in trouble?

I thank you in advance for your support.

As a troubleshooter, the first thing a technician does when arriving at the building site to find problems is to look at the Fire Alarm Control Panel (FACP) to see what it says about the troubles. The FACP and its display, however, is not the most important tool that a technician works with.

By far, the most important tool that a technician uses to find problems in a fire alarm system is the voltmeter.

The difference between the two meters is that the expensive voltmeter is too big and too expensive to be ALWAYS carried while troubleshooting in a building; the cheap voltmeter is small enough to ALWAYS keep in a pocket or on the belt (so it is ready to be used anywhere and at any time) and it is also inexpensive enough to be replaced if it is lost or stolen.

Bottom line for you as a troubleshooter, a cheap voltmeter is better because it can always be carried with you and be always ready to be used.

The power on the circuit, depending on the manufacturer of the panel, could be anywhere from 16 volts to 24 volts, but that is NOT what the voltmeter is going to show you. Because there is data riding on the circuit along with the power, the voltmeter is going to show you a very unsteady 10 volts to 24 volts, always changing from the low voltage to the high voltage and back every half second or so.

This changing voltage on the SLC (Signaling Line Circuit) is normal and it is what should be seen on the circuit. Get out your voltmeter and measure it, get used to reading the voltage. That is how you can see the problems you have to troubleshoot.

Class B versus Class A

Don't take my word for it. You need to get used to carrying and using your voltmeter.

Stand at the fire alarm control panel and read the voltages on the SLC (Signaling Line Circuit). The voltages you read will be varying up and down, but the voltages will be there.

Now go to the place you disconnected a wire, but don't disconnect the wire. The first thing to do is to confirm that you are reading the same voltage (on the SLC) at the device as you were reading at the panel.

Once you have read the voltage to confirm what is normally getting to the device you are looking at, disconnect one positive wire from the device.

Without reconnecting the wire, use your voltmeter again. Check the voltage on the other positive wire (measure the voltage between it and the negative wire). This should still be approximately the same as the voltage you were getting on a normal circuit.