How Does One Find a Soft Ground Fault?

A soft ground fault, unlike a hard contact with ground, is an unwanted electrical conduction going through water or bad insulation. There is a electrical leak, but not a hard contact. Often, to find it, an insulation tester is needed.

However, if enough voltage is applied, the resistor breaks down and its current shoots much higher without much change in voltage. Its voltage to current ratio lowers because the resistance lowers. That's kind of fickle, isn't it?

As an example, at 10 volts, the resistance is the value shown on the stripes. However, say 10 million volts is applied. The resistance changes. The arc of electricity across the resistor burns it up and for all intents and purposes, the resistor changes to become a conductor.

Let's get back to reality.

The resistance of the insulation around a wire is a very high value. If the voltage is high enough, though, the insulation conducts electricity and then burns up: the burned insulation effectively becomes a short.

At a lower voltage than what it takes to burn up the insulation, however, the voltage can be enough to push through a small amount of current. This is where the insulation/voltage threshold comes into play.

The insulation/voltage threshold is lower at that location on the wire, and the electrical current flowing through the insulation at that point can be the cause of the fire alarm panel detecting a ground fault. 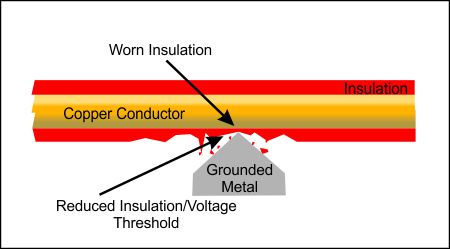 Water, oil, grease, or other chemicals on the insulation will greatly increase the speed of the aging. 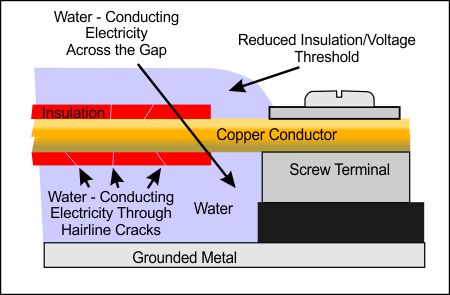 The voltage/insulation threshold of water is greater for distilled water (very high voltage) than it is for dirty water (salt, chemicals, just plain dirt in the water).

Water in building wiring (it's not supposed to be there, but it gets there anyway) usually has an insulation/voltage threshold of about 7 to 9 volts.

Looking for the Ground Fault

If the insulation/voltage threshold is below 12 volts but above 3 volts, the fire alarm panel shows the ground fault while the ohmmeter doesn't see it. This is a problem.

Use an Ohmmeter and Interpret the Unstable Readings

This is the inexpensive way, does not require the technician to carry a special meter, but requires a real familiarity with the ohmmeter.

One drawback is these readings are hard to interpret and sometimes they show false-positives: the technician can start looking for the soft ground fault in the wrong zone.

Build Your Own Tester

To build an insulation tester for use on fire alarm systems, use the instructions printed in the Nuts and Volts Magazine September 2010 Issue, Page 42 at http://nutsvolts.texterity.com/nutsvolts/201009/?folio=42&pg=42#pg42.

When calling up that site, just by X-ing out of the subscription request drop-down, you can read most of the article. However, even if you're cheap like me, you still might want to subscribe. The subscription isn't all that expensive, it is a good magazine for the electronic hobbyist, and besides, you can read the full article.
The advantage to building your own tester is that you learn more about soft ground faults, and more about the testing for soft ground faults. Not only that, but without spending much money, you can possess a very useful test instrument.

The disadvantage is it really is a one person test meter. It will never be an industrial strength meter to be shared with other technicians around the shop; unlike most store-bought meters, it won't stand up to abuse.

Having adjustable testing voltage and costing up to a few hundred US dollars, some are billed as ohmmeters.

Others are actual insulation testers. Electricians know them under the brand name of Megger. The insulation testers are more expensive, starting at several hundred US dollars -- but be careful. These insulation testers were first manufactured to test insulation using much a higher testing voltage (up to 15,000 volts). Only a few of them go down to a safe 20 to 30 volts for testing fire alarm systems.

Soft ground faults can look like they're fickle, they show up on the ground fault light of the fire alarm panel, but don't show up on most inexpensive ohmmeters.