It's just one more strobe, what's the problem?

Adding just one more strobe to a fire alarm circuit isn't a problem if the installer knows exactly the strobes that are there already, and the exact length and gauge of the wire. The power supply itself might not be a problem, but the circuit should be calculated using the manufacturer's specifications. 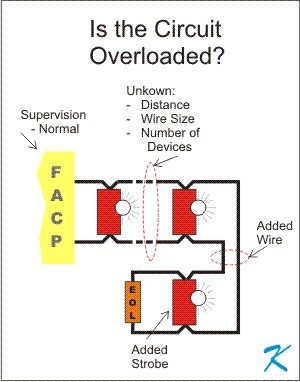 Just because the added strobe flashes when tested does not mean it will work when there is a power blackout.

Sometimes, after a building has been established for years, the fire marshal or the building owners want to add another horn or strobe. Or maybe, with remodeling, more horns and strobes are just added to an existing Notification Appliance Circuit (NAC). Really, it's just one more strobe and the circuit works.

Most of the time, adding just a few horns or strobes to an existing circuit isn't considered to be enough of an issue to re-engineer the NAC. However, in a life-safety fire alarm system, adding these horns and strobes can be a problem.

The problem is one of overloading wiring of the Notification Appliance Circuit (NAC).

There are two types of overload:

1 - From the panel, too much current is used during an alarm.

If the panel is overloaded, the panel quits providing power to the NAC during an alarm. At the time of installation, the problem is quickly noticed, and fixed.

2 - In the building wiring, too much current is used during an alarm.

If the wiring is overloaded, some horns or strobes won't work during a blackout. Unless the circuit is turned on and checked after a 24 hour blackout, problems will never be found out until there's a fire.

Remember, the building is usually occupied. The testing is done while people are getting annoyed with the noise and the power is still on in the building. Sounding the horns for 5 minutes after the power has been off for 24 hours is almost never done.

The panel is providing enough voltage to the circuit, what's the concern over the power at the end of the line?

Even more important, when the panel is supervising the NAC, doesn't it give an alert (trouble indication) that too many devices are on the circuit?

Most NAC circuits are conventional wiring, and the panel only supervises the wiring; it runs a continuity check to make sure the wires are intact.

During an alarm, the panel's supervision circuitry isn't even connected to the circuit.

Power Loss in the Wiring

Wire is a resistor. It may be a very low resistance conductor, but it's a resistor just the same. During an alarm, as electrical current passes through the building wiring, some of the power is siphoned off in the form of heat.

This siphoning of power has a direct relationship to the voltage arriving at the last few devices. During an alarm, as one gets further from the panel, the voltage measured at each device is lower. If there isn't enough voltage to power the farthest few devices, the voltage at the panel doesn't matter.

The wires are hidden in the walls; there's no way of actually measuring the length. The wire, being an unknown length, has an unknown resistance. When a horn or strobe is added to the circuit, more wire is added, and this added length just adds to the loss of power.

This added power loss may mean the last device might not work.

Smaller wire has more resistance. With the increased resistance of smaller wire, the power loss is increased.

If the installer didn't know the problem, smaller diameter wire might be used, and using smaller wire just adds to the power loss. (This is real life, this often happens.)

Numbers Adding to the Current

Adding another horn or strobe increases the current flowing through the wires; this increased current adds power loss.

Most places have poor to no record keeping. If the as-builts are still available, they're almost never updated (they should be, but the updating is rarely done). Who knows? In the past, more horns or strobes could have been added. Adding still another horn or strobe now might push the current beyond the circuit's design limits.

An example is a circuit designed for 10 strobes. At one time, it worked as designed. Years ago, however, another strobe was added, and then another strobe added, and so on until 10 strobes have been added to the original 10. (This kind of adding to the circuit has been done.)

What has that got to do with anything you ask?

Everything. During a power blackout, the standby batteries are the only thing that keeps the fire alarm system working.

But, then again, the 24 hour power-out test is the only test of a notification appliance circuit that really shows if the circuit will work during a power outage.

When the circuit has too many horns or strobes, or too much resistance in the wires, that 20 volts from the panel just might not provide enough power at the end of the NAC for the last few horns or strobes.

Yes, I use the word "overload." But overloading doesn't just mean the fuse is about to blow.

Overloading here also means that because the wire is too long, the wire is too small, there are too many horns or strobes, or the battery is near the end of its life during a blackout, the voltage provided by the panel isn't enough.

Making changes or adding to a Notification Appliance Circuit the first time might not be a real issue:
These are a lot of "ifs" to be taken into account just to add a single horn or strobe.

In other words, adding horns or strobes to a NAC needs to be done with caution because normal fires alarm supervision won't detect a problem.

The whole concern is about circuit overload. If it's not known many additions have been made to the circuit in the past, this could be the 5th addition, or even the 10th addition. Just adding another 6 feet of wire and one horn could push the circuit into overload.