Why does Current Go Up as Voltage Goes Down in a Fire Alarm Strobe?

A fire alarm strobe flashes at a constant rate and brightness, even when its voltage changes up or down. Watts law says P (Power) = I (Current) times E (Voltage). Mathematically, if voltage goes down, current has to go up, to keep P (Power of the Flashes) Constant. 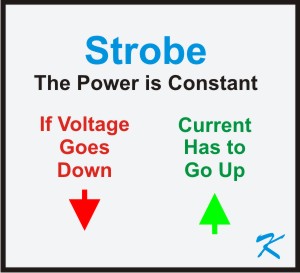 In a Fire Alarm System, a Strobe gets people's attention. In case of fire, it has to work even the fire alarm panel is on batteries during a power outage. When on batteries, the voltage of the panel decreases.

In a fire alarm system, strobes are notification appliances; the flashing strobes get people's attention. They're also constant power devices.

Constant Power Used by the Strobes

The strobe flashes at a constant rate, and the brightness of the flashes doesn't get dimmer as the strobe's input voltage decreases. In spite of differences in voltage on its input terminals, when flashing, a strobe is always putting out the same amount of light power.

To keep a constant light output, the input power has to stay the same.

I hate to use formulas in the explanations, but Power = Voltage X Current. The gist of the formula, though, is if power is going to remain constant, when voltage goes down, current, to compensate, has to go up.

Voltage varies quite a bit in a fire alarm system. This is important. The question is "why?"

24 Volts Nominal is not 24 Volts Absolute

Commonly, many people think the power supply of a fire alarm panel is 24 volts. It is, sort of.

Whereas the literature about a fire alarm panel shows it's using 24 volts, in most cases, the 24 volts shown in the specifications is a nominal, or approximate, voltage: anywhere between 20 volts and 28 volts.

While AC power is applied to the panel, the panel is charging the backup batteries. As the batteries are charging, the panel power supply voltage is somewhere between 26 and 28 volts.

When the AC power is lost, the batteries take over. As they're used, the batteries will slowly lose voltage. From the original 26 to 28 volts, the battery voltage drops down to about 20 volts. Without AC power, this is the voltage of the panel. This is also about all the life one can expect from the batteries.

Even with these variations in power supply voltage, the strobes still require enough power to produce a constant flash rate.

Voltage is Lost in the Field Wiring

But even during an extended AC power blackout, as the batteries lose their voltage, and with voltage loss in the wiring, the voltage at the strobe still should never go below 16 volts.

Common input voltage specifications on strobes range from 16 volts to 33 volts. The current use of the strobe is lowest at 33 volts, and highest at 16 volts. Because strobes are life safety devices, the current ratings are given at the highest current level, which is 16 volts.