Can a Person Just Add a Horn or Strobe to an Existing Notification Appliance Circuit (NAC)? 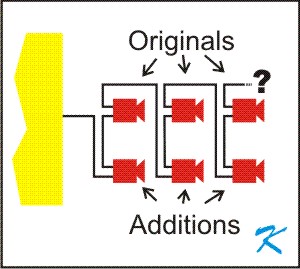 When adding a horn or a strobe, does one really know how many additions have been added before?

In a building that has been remodeled and remodeled, when a fire drill is sounded, have you ever found that a few strobes are running slow or won't even work? Then, when troubleshooting, the supervision voltage at the end-of-line resistor shows a normal circuit?

These measurements may show the wiring to be normal, but something isn't working. What's going on?

The Box Supplying the Power Isn't the Problem

It's not the Booster Power Supply, or Signal Power Expander, or other Notification Appliance Circuit (NAC) power supply providing power to the circuit.

From the standpoint of the power supply, if too much current is being drawn, the internal safeties for the NAC outputs will turn off the circuit rather than overload the power supply. If any strobes or horns are working, the power supply isn't being overloaded.

It's the circuit itself, the wiring outside the power supply box, along with the number of devices on the circuit, that's having a problem.

Probably, over time, with each remodel or addition to the building, what has happened is a device has been added or the wiring has been changed.

The thing is, as each addition has been made, the addition or change wasn't very much. However, when including all the accumulated additions and changes, they all add up to an overloading of the circuit.

I know, the circuits usually have been designed with at least 20% headroom, so adding a single horn or strobe should not cause any kind of problem. But, when the added wiring is included, and the additions to the same circuit have been done 10 times without proper documentation on any single addition (so no one knows what is really there now), the 20% headroom that was originally designed into the circuit just isn't there anymore.

Sure, the end-of-line resistor is showing supervision voltage. But do the math; very little current is used for supervision. No matter how long the wire or how small the gage of the wire, that small current doesn't provide much of a voltage drop on the wiring.

The Additions That Have Been Made

There are four ways of adding horns and strobes to a NAC circuit.


Results of the Four Methods

Method 1 - As remodeling and additions to the building has been done, if devices have been added over time, one can count on Method 1 to have been used a number of times. Adding just one horn or strobe might in reality be adding one device on a circuit that already has lots of extra wire and three or four devices too many. When the system is running on batteries, this addition, along with all the past additions, will quite often prevent a strobe at the end of the circuit from working, or at best it may only flash slowly.

Method 2 - Counting the horns and strobes works if one can make sure there aren't any hidden in rooms close by. Usually this requires turning on the zone, making noise and flashing lights to make sure all of the horns and strobes on the circuit are found. Also, as long as the history of the building is known (and that includes knowing for sure that since the original installation nothing has been added), installing an extra single horn or strobe, along with only short wire runs will probably be OK, but it's really only a guess.

Method 3 - Here, as long as the history of the building is known, and as long as the original installer made sure the as-builts were fully updated to include the wire size and wire length, and the original design included plenty of headroom to allow for the addition extra devices... adding a device or two, using the proper calculations, will usually be OK.

As far as calculations go, whereas the specifications found in the NFPA indicate that calculations need to be done, unless the system is properly tested, the calculations only show a prediction... not a surety.

The problem is that none of these methods can be counted on; they don't show whether the circuit works. None of first three methods use what is actually on the circuit. These methods also assume that no other company has had their fingers in there adding devices and wire.

Method 4 - Only by using method four can the circuit be documented to actually be within the specs of the NFPA.

All this is to say that to actually make sure the circuit works, by properly testing the circuit - live - making noise and flashing lights, under adverse power conditions, Method 4 is the only method that can be counted on.