Which Way Does Electricity Flow?

Which way electricity flows depends what is being looked at. Electrons actually move through a wire from the negative terminal of a battery to the positive terminal; electrons are negatively charged. Positive charges appear to move the other direction, but actually stay put with their non-moving atoms. 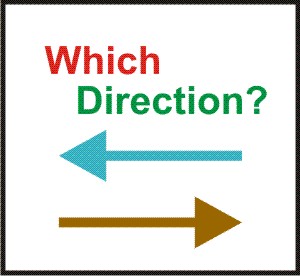 Electrons go one direction while the positive charges seem to go the other. Which is correct?

As an electron leaves the atom and is replaced with another electron, each atom changes from a neutral charge to a positive charge and back again. The atoms of a wire themselves, however, do not move.

These two theories seem to be in conflict. Where'd this confusion over the direction of electrical flow come from?

The Discovery of Electrical Flow

Benjamin Franklin started the confusion. He rubbed wool and wax together and noticed what we call static electricity.

He published the discovery.

The Establishment of the Direction of Flow

Around the world scientists and engineers alike added their own ideas to this theory, held discussions on this theory, published their findings using this theory, and formally established that, for electrical current, this was the direction of flow.

In the scientific and engineering world, and in all the literature and books, everyone "knew" that in a circuit, electricity flowed from the positive battery terminal to the negative terminal. This was a well-established concept and any change to that concept would cause mass pandemonium.

But the confusion over electrical flow direction started anyway.

In 1869, using high voltage, German Physicist Johann Hittorf noticed a phenomenon of waves or rays emanating from the cathode in a vacuum tube. Later these rays or waves became known as cathode rays. 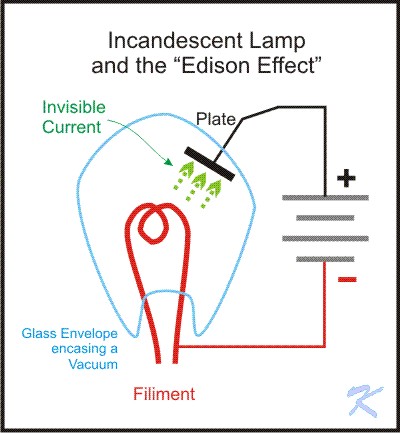 Some years later, on hearing about these rays, and while trying to understand and prevent some blackening on the inside of incandescent lamps, Thomas Edison had one of his assistants place an extra electrode inside a lamp.

This current, flowing from the hot filament, through the vacuum, to the electrode, was invisible. No practical purpose could be found for the discovery, but Edison patented this "Edison Effect" anyway.

Years later, J.J. Thomson investigated the cathode rays and he figured out about the electron in the atom. He also concluded that the current flow known as the "Edison Effect" was made by electrons traveling through the vacuum.

The Conflict in the Direction of Electrical Flow

We had a conflict. The theories and books all said that in a circuit, electrical current flows out of the positive terminal of a battery, and returns into the negative terminal. These discoveries concluded that, contrary to conventional wisdom, electrons flowed the other direction.

Attempting to change the books, theories, and especially the minds of all the engineers and scientists around the world would be the cause of mass arguments. It was also assumed that the actual direction didn't really make a real difference, at least as long as everyone stuck to one direction of electrical flow or the other.

Of course, conventional current flow does not work well with vacuum tubes or with the sub-atomic level understanding of magnetism, but it was decided that these problems were less of an issue than trying to change everybody's minds and all the books.

Rather than having engineers and scientists fighting with each other over the direction of current flow, the decision was made that everyone would stay with what has become known as "Conventional Current".

Back to the Present

Whereas the electronic technician is correct about the movement of electrons, with the exception of electrons traveling through vacuum and the sub-atomic effects of magnetism, there's really no harm in the scientists' and engineers' concept of the conventional electrical current as electrical flow.

As a matter of fact, for a few scientific purposes, the direction of conventional current helps in understanding. Lightning, for example, starts at the positively charged ground that draws electrons from air molecules close by. As the positive charge travels up, the electrons from further up are drawn down until the whole column of air is ionized, conducting electrons from the negatively charged clouds to the ground.

Liquid or gaseous substances like air, water, even human flesh, have positive ions (atoms without enough electrons to make them neutral) that physically move. These carry their positive charge with them as they travel through the substance. (This flow is really ion migration, but is considered by some to be electrical flow.)

Acid in batteries and electrolytes in electrolytic capacitors are examples of this. Some people consider this to be the correct direction of electrical flow.

However, in electrical design and maintenance, batteries and capacitors are the exceptions and not the rule. They are only components shown on schematics and wiring diagrams.

There is a lot more to the drawings than just these exceptions. For the understanding of electrical current flow in solid materials like copper (lines on the schematics), and components like semiconductors, most capacitors, resistors, inductors and transformers, etc., the atoms stay in place while the electrons move.

Does It Really Make a Difference?

The negatively charged electrons are drawn to the positive terminal of the battery, but don't move more than one atom at a time. While it is perceived that the positive charge on the atoms of the conductor moves to the right, the charge is not moving.

The perceived movement of the positive charge is more like the "Stadium Wave" seen at a football stadium. What looks like an ocean wave is just people standing and sitting. The people aren't moving, they're just standing up and then sitting down again. However, because they are in a synchronous movement, the "Stadium Wave" is perceived to move.

The answer to that is probably "It Depends".

Getting back to the diagram though, one has to really understand what is being looked at. Is it the negatively charged electron movement to the left, or is it the passing of positive electrical charge to the right, that is the direction of electrical flow?

The answer to this is more about what else is being considered. There are two components to electromagnetic force, for example.

Magnetic Force -- Then again, because the positive charges aren't physically moving, and magnetism is tied in with electron or proton movement (in a wire, it's the electron movement that is creating the magnetism), the electrical flow would be considered to be electrons moving to the left.

Standing back and looking at a wire, though, there are three speeds of travel.

Protons -- The positive charges in an atom (positive ions using the "Stadium Wave") do not move at all. The protons are moving at 0.0 meters per second.

Power -- Regardless of which way electrons are moving, or which way the positive ions appear to move, power is traveling either direction on a wire at somewhere around 2/3 the speed of light. Power transfer on a wire, in either direction, is around 200,000,000 meters a second.

Quantity -- In order to use Ohms Law (E = I x R) or Watts Law (P = I x E), electrical current (I) has to be quantified. The agreed on quantity is tied to the number of electrical charges going past a specific point in a wire. (Positive charges for the engineers concerned with designing electrical circuits, negative charges for the technicians trying to deal with the effects of current in a circuit.)

In reality, the "Statium Wave" movement of positive charges doesn't quite describe electrical flow because, in an electronic circuit, the protons don't move along a wire. Electron movement doesn't quite describe electrical flow because, in the long run, the electrons move so slow. As it moves from one atom to another, each electron jumps quickly, but overall, because the electron keeps stopping on individual atoms, an individual electron is going slowly from one end of a wire to the other.


The Stadium Wave mentioned above is actually part of "Wave Theory", where the electrical current moving in either direction from the battery terminals really isn't the important part, it's the energy being transferred from the power source to the load that's the important part. This transfer involves more than just electrical force and magnetism directly, but capacitance, inductance, propagation, impedance, reactance, frequency, and power.

In electrical theory and electronic theory, this power transfer is usually done using transmission lines or wave guides, or even propagating at full light speed from transmitting to receiving antennas.

This gets really deep into physics, and the details are still being argued about. I'll have to get into wave theory in another article.

Which direction does electricity flow? The answer to that seems to be just an arbitrary decision, based more on what the electricity is being used for, and based less on the sub-atomic physical characteristics of atoms (the electrons or protons).

The electronic technicians understand this and live with these symbols.
Greetings Douglas,

I am still not clear what direction electricity flows from reading in your website. At the end you basically say it didn't matter.

You have also said that it is the ("power"?) that zips through from the source to the load. I assume by power you don't mean energy.

Most technicians think that electricity flows in a wire the direction that electrons flow. This is the direction in a wire that actually shows physical movement. A major advantage to this thinking is that in a wire, magnetism is affected by the movement of electrons. (Magnetism is a major effect of electromagnetism). A major disadvantage to this thinking is that electrons can take minutes to hours to move from one end of a wire to another end, and everyone "knows" that electricity travels close to the speed of light.

Most engineers think that electricity flows in a wire the direction that positive charges travel. (One of the electrons is missing from an atom makes the atom positively charged). The advantage to this thinking is that, even though the positive charges aren't actually moving, when looking at a wire end-to-end, the effect seems to show the positive charge is moving at close to the speed of light.

Movement on a Pair of Wires

Both ways of thinking about electrical movement work; only one way or the other can be used at time. Trying to use both ways at a time becomes confusing when trying to explain how electricity works to someone else.

In order for me to say electricity flows one direction or the other, everyone world-wide has to agree on the definition of electricity. It's been over a hundred years since the electron was discovered, and still, there is no real agreement on what should be thought of as electricity.

For me, I choose to refer to electrons flowing in the circuit. The physical electrons as they move around a circuit seem more real than the perceived positive charge movement. Rather than saying "electricity is flowing", I try to say "electrons are flowing". Specifying "electrons", to me, seems to work better than the ambiguous word "electricity".

If you can get all the engineers and technicians, and all the educators and textbooks to agree on what is electricity, then I can tell you which way it flows. But until there is an agreement among everyone about what electricity is, whether it's moving electrons or moving positive charges, the best I can tell you is that either direction can be used, just stick with the direction you choose... and don't put down anyone for choosing the other direction.