What is the Difference Between Electricity Flow and Signal or Power Flow?

Electricity Flow is the One-Way movement through a medium like a wire. There has to be two wires so both directions are accounted for. A signal, though, is thought of as power. Power goes from one place to another, like from an outlet to a motor. 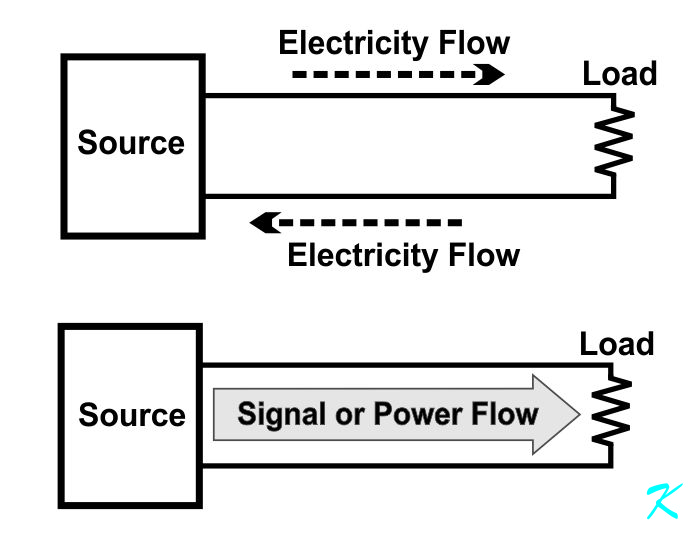 Electricity is the movement of electrons or charges through a wire; signal flow is the transfer of power or energy from one place to another. Electricity may carry signals or power, but signal flow doesn't just use electricity.

A drawback in this thought is that when we are only thinking of one wire at a time, we think of either electron movement or charge movement. Electricity flows in a circle, or complete circuit. Both the electrons and the charges have to return to the source, or they are going to "pile up" on the load.

This transfer of forces can use the electrons or the charges being guided by the pair of wires, low frequency electro-magnetic forces being transmitted and received using "radio waves", high frequency electro-magnetic forces in the visual spectrum transmitted by the sun and picked up by our eyes, or even gravitational waves crossing the universe caused by two black holes colliding.

As fire alarm technicians, we have to work directly with copper wires, fiber optics, or radio waves (RF or wireless), but all the purpose of the wire, fiber, or RF is to transfer signals or power from one place to another.

The rules and codes that we have to follow are concerned with signal flow, but using wires, fiber, and RF is how the signals and power is being transferred from one place to another.

The NFPA and Signal Pathways

The National Fire Protection Association (NFPA) has pretty much given up talking about electricity flowing in wires for their Pathway Classifications.

Now, they are talking about signals flowing from one place to another.