Should the Main Fire Panel Release the Fire Suppression? 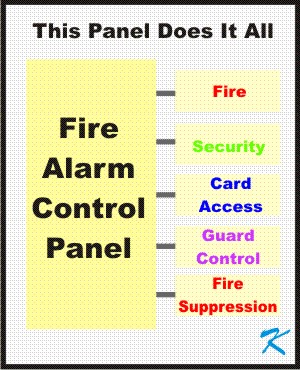 Combination Fire Alarm panels (and everything but cook the dinner panels) are sold to accounting departments as a way of saving money because they are only buying and maintaining one system. The problem with combining systems is that when something goes wrong with one part of the system, nothing else will work.


According to NFPA Code, is it permissible to use the common area fire alarm control panel to release fire suppression systems?

If the common area fire alarm system has been tested and listed to release the different kinds of fire suppression systems, the answer is yes.

The code says yes, combining the common fire alarm system with the release system is allowed -- but the real question is should the two systems be combined?

If a common area fire alarm system has a false alarm, the consequence of a false alarm is that people go out into the parking lot and the fire department arrives when it is not needed. If it is a business, there is also a loss of productivity.

On the other hand, a false activation of the fire suppression system is still all of the above. But added to all of the above is the cost: The bottom line -- the damage incurred from false alarms on a common area fire alarm system is nothing compared to the damage that can be incurred from a false activation on a fire suppression system.

There is very little that can go wrong with a stand-alone fire suppression control system.

The main disadvantage to installing separate systems is seen by those paying the bills and those calling for service.

Two separate systems do cost a little more to install -- when it comes to bidding, this is an issue.

There are, however, issues involved with combined systems that balance out the cost savings.

The release portion usually covers one or two rooms, while the common area fire alarm system is installed throughout the entire building. Just the sheer number of devices on the common area system is ten times, a hundred times, or even a thousand times the devices and wiring used for a stand-alone suppression release system.

Doubling or tripling the number of devices means the possibility of things going wrong is doubled or tripled.

If combined, making repairs anywhere in the building to the common area fire alarm system can affect the release portion of the system.

Remember, all electronic systems eventually have breakdowns, including fire alarm systems. When the common area fire alarm system is having troubles, no one really knows just what it is going to do. Working on a smoke detector in another part of the building can potentially cause a release.

Even though they're selected to do maintenance and testing (sometimes they're chosen because they're the low bidder), some service companies are not as well acquainted with the releasing system as other companies. Because they may not know about the release system or what to do about it, they can get into trouble.

When making the decision to combine systems, remember, combining the release system and the common area fire alarm system has long term consequences. Having serviced fire alarm systems for nearly 20, Douglas Krantz has compiled his knowledge of the causes of Ground Faults and how to reliably detect them into the book Make It Work - Hunting Ground Faults. The book shows the three types of ground fault, what equipment should be used with each type of ground fault, and how to locate those hard-to-find ground faults.

What is a Stair Pressurization Fan (SPF)?
Which Way Does Electricity Flow?
What's the Difference Between Class A and Class B?
What Makes the End of Line Resistor So Important?
What is a Flyback Diode?
What is a Fire Alarm System?
What is an RTU (Roof Top Unit)?
What Causes an Open NAC?
Learn about fire alarms, one article at a time -