How Are False Alarms Dangerous?

False alarms usually don't cause injury, they almost never cause property damage, but they do annoy lots of people. It's when people start ignoring false alarms that real fires become very dangerous. 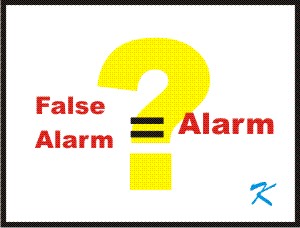 Each false fire alarm increases the severity of a real fire.

When there were never any false fire alarms, and the alarms only sound off with a real fire, people do pay attention take immediate action. This is noticeable as people go out into the parking lot in their pajamas at 3:00 AM.

The severity increases with each false alarm. As the false alarms go off at random times, more people are less likely to take necessary action, and the likelihood of injury is therefore even greater.

This progression is not good.

People Have Died Thinking a Real Fire was Another False Alarm

What's even worse, even after the false alarms quit happening, many years will have passed before this damage wears off.

Some people are reluctant to ever take necessary action again because they remember the false alarms. They're so callused they ignore the fire alarm under any circumstance. Sometimes they don't want to be bothered with another false alarm, so they disconnect the fire alarm system wherever they are, including in hotels, apartment buildings, offices, etc.

With each false alarm, the dangers of injury and death increase when a real fire occurs.

What can we in the fire alarm industry do to reduce and hopefully eliminate false alarms?
Check It Out
Check It Out