What is a Firefighter's Telephone System? 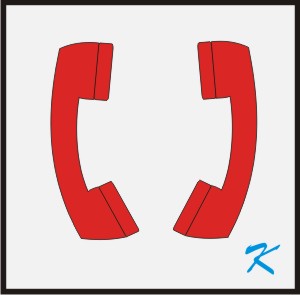 In a large building, so they can talk to each other while battling fires, firefighters use their two-way radios. But when the radios just don't work, the firefighter's phone system is the next best way to communicate.

Instead of ringing, the phone at the fire command center just detects another phone plugged in and sounds an alert tone until answered.

It's a two wire system connecting the firefighter's phone jacks to the command center.

When debugging the two wires of the firefighter's phone system, you can connect:

Get the Book Make It Work - Adressable Signaling Line Circuits

The building wiring system is a Class B wiring scheme (complete with end-of-line resistor), or a Class A wiring scheme (with the wires going back to the main panel after daisy-chaining the jacks). If a wire breaks, the supervision circuitry at the command center goes into trouble.

Resistor/Capacitor Network in the Jacks or Handsets

Here's where the fire alarm technician or installer can get into trouble.

Between the two wires of the building wiring and the microphone/earphone inside the handset, a resistor/capacitor network is required. All phone systems have this network, or the equivalent.

Depending on the manufacturer, this network may be behind the wall-plate in the jack, or in the handset itself.

Chances are good the firefighter's phone jack inside the elevator car is not going to be a manufacturer type-approved wall station. Instead, it's going to be an aesthetically pleasing jack that the fire alarm installer has wire into the system.

The request to the elevator installers to provide a single-gang hole so the manufactures approved firefighter's wall plate phone jack can be installed will only fall on deaf ears. This is especially true, since this is in their expensive elevator, the building owners don't want one of these.

I know that this violates every code in the book, but the fire alarm technician or installer has to use common sense here. (Tech support for the firefighter's phone system may help also.) The fire alarm system installer is going to have to be creative and wire the jack.

To see how to wire the jack inside the car, look at the wiring on the wall jack that is used for the rest of the firefighter's phone system.

Overall, the firefighter's phone system is the same as the system that Ma-belle uses. With the exception of fire alarm type supervision, the system can be troubleshoot just like Ma Belle's Plain-Old-Telephone-System.
Check It Out
Check It Out