Why Does a Solenoid Coil Overheat?

The apparent resistance. or impedance. of a coil goes up when an iron core is placed inside. When the solenoid coil is removed from a valve assembly, its impedance goes down so its current goes up, burning the wire inside the coil. 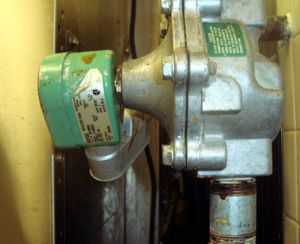 The gas valve to the stove in a commercial kitchen is kept open by an AC Solenoid. This solenoid can overheat if removed from the valve.

Doing a fire alarm inspection, a technician saw a solenoid on a valve in the kitchen at a church. He removed the solenoid from the valve's post to avoid accidental activation during the inspection.

I know, it didn't have to be removed. However, after inspecting a lot of fire alarm systems, one gets paranoid. To avoid property damage during inspections, a technician may take the precaution of disabling all solenoids in the building.

In a little bit, the fire alarm system went off because the solenoid was spewing enough smoke to set off the smoke detector in the kitchen.

The key factors in the smoking solenoid is it's AC and normally it's powered on.

The kitchen was a commercial kitchen. The solenoid, mounted on the post of the gas line valve to the stove, was the gas shunt or shut-off solenoid. During normal operation, keeping the gas valve open and allowing gas to the burners, the solenoid is powered on.

When there's a fire on the stove, the fire suppression system douses the stove with firefighting chemicals. At the same time, by cutting off the power to the solenoid, the cooking gas to the stove is turned off.

Usually the gas stays off until someone is there to press a reset button; without this reset, the power to the solenoid doesn't get turned on again.

Solenoid as an Electromagnet

The solenoid along with the post of the valve (it has an iron core) is an electromagnet assembly. The magnetism impedes or resists the changes in the electrical current inside the coil of the solenoid.

With the iron of the valve post inside the coil, the assembly makes for a strong electromagnet.

Removing the post from the solenoid coil removes the iron from the assembly, and makes the coil a weak electromagnet. The resistance to changing current, or the impedance of the coil, is reduced, greatly increasing the current through the wire in the coil.

The only reason a wire gets hot and overheats is that too much current is running through it.

Keep in mind that all wire has resistance. The resistance, when current is flowing through the wire, will convert some electrical power to heat: the more the current, the more the heat.

When the coil is in its normal place on the post of the valve, this assembly is a strong electromagnet; the electrical current only makes the wire in the coil a little warm.

However, with the coil removed from the post of the valve, the electromagnet is weak, so the electrical current inside the coil becomes great enough to overheat the wire.

To keep the magnetism of the solenoid assembly strong, one common method of protecting the coil is to substitute a large iron shafted screwdriver for the iron of the valve post. Simply insert the screwdriver shaft into the hole of the solenoid, and leave it there.

This keeps the electrical current down, and the coil stays cool.

Remember to put the solenoid back on the valve afterwards, or the stove won't work.

When servicing the stove or inspecting the fire alarm system, remember the trick of the screwdriver. To keep the solenoid cool, if it has to be removed from the valve for inspection or servicing, insert a large iron shafted screwdriver into the AC solenoid.