What Makes Interfacing the Fire Alarm to Elevator Capture Difficult?

Fire alarm installers and elevator mechanics use the same words, but the words have different meanings. When interfacing the fire alarm system and the elevator controls, it helps to take the time to understand each other's needs. 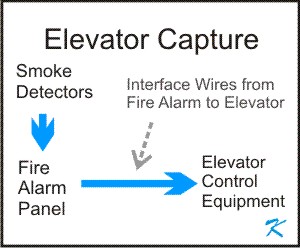 To capture an elevator, usually smoke is detected by smoke detectors and they are controlled by a Fire Alarm System. The Elevator has its own controls. The systems have to work together, however interfacing the two together is where problems sometimes exist.

The elevator company installs and upgrades the elevators. By itself, this part of the capture system usually works correctly.

It's location versus function

Because of these different languages, the labels between the systems have to be different on the ends of each wire.

When these languages are understood, the interface between the smoke detection system and the elevator controller becomes easy, and when it's captured, the elevator will go to the correct designated floor.
Check It Out
Check It Out