Can There be Too Many T-Taps on an SLC?

On a Signaling Line Circuit, Signal Pathways and Electrical Wiring are different concepts. Class A systems cannot have the Pathway T-tapped, but Class B systems can have their pathways T-tapped. Electrically, though, all devices on an SLC are T-tapped; electrically, all devices are effectively home run. 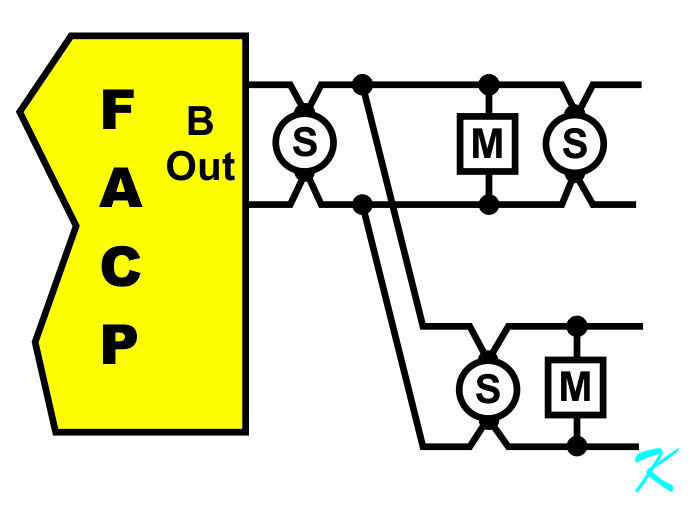 There are two ways of looking at T-taps: Signal Path and Electrical Wiring.

When looking at signal path, you're look at "a pair of wires that together, carrying a signal or some power".

The signal path is what the National Fire Protection Association (NFPA) is looking at when discussing the Classification of Circuits (Class A, Class B, Class C, Etc.).

For Class B (Signaling Line Circuit or SLC), every device is still attached to the pathway. A Class B SLC, however, only starts at the panel. A Class B SLC can be a single pathway, or have as many T-taps in the pathway as necessary.

The signal path is what electronic technicians and engineers look at when considering wave length of signal transmission. Related to that is the speed of travel for the power or signal along a pair of wires (usually somewhere around 2/3 the speed of light), and conversely, how far the power or signal travels along the pair of wires in a given length of time.

Keep in mind that energy (sometimes referred to as power) cannot be created or destroyed, it can only be converted.

For a small bandwidth fire alarm system, the data-rate (baud-rate or number of bits-per-second) is so slow compared to the length of wire that when there's a data-bit change from a zero to one or a one to zero, the power of the signal has time to hit the end of the wire pair, and even bounce back and forth from one end of the circuit several times before the next data-bit change can occur. In other words, the power reflected from the end of the circuit does not interfere with the original signal because the original signal is so dreadfully slow.


On the other hand, for a large bandwidth RS485 circuit used in automation, the data-rate is high enough that by the time the power of a signal has reached the end of the wire, the original signal could easily have changed from one to zero and back several times.

The resistor may be at the end of the circuit, but to differentiate this resistor from the fire alarm system's End of Line Resistor, the technical term for this resistor is "Terminating Resistor". It terminates the wire pair.

In broadcasting or radio communications, the terminating resistor is also known as a "Dummy Load". These are bigger wattage value resistors than the ones used with RS485 circuits, but they do the exact same thing, they soak up the power of the signal so it doesn't bounce back. (In case you're wondering, I've worked with a 50-Ohm, 35,000-Watt Dummy Load [Terminating Resistor].)

Years ago, in Duluth Minnesota, someone unbolted an FM radio antenna from the top end of the transmission cable going up the tower. This caused the power of the signal to bounce back (get Reflected). The transmitter bounced that power back up the tower, along with added new power. The power kept bouncing up and down the tower - with new power added each time. In not too long, the top third of the tower became a torch, at least for several minutes. Quite a few people saw it burn. There's a lot of power from an FM radio transmitter. The cable going up the tower had better be terminated with an antenna, or the cable will start burning with the heat from the power as it keeps bouncing up and down the tower.

OK, on an addressable EST Signaling Line Circuit (SLC), EST adds a small value resistor at each device location (less than an ohm or two). For electrical purposes, though, even the negative wire on an EST system can be considered to be a single piece of copper.

In essence, all devices in a fire alarm system are T-tapped off of the positive and negative wires. Electrically, the fire alarm control panel can't tell if the devices are home run, in a Class B circuit, or in a Class A circuit.

However, to make sure the devices are connected to the panel (supervise the devices) on a Signaling Line Circuit (SLC), the control panel continually takes attendance (polls the devices) to make sure they stay connected. It does this with the data that it sends and receives from the SLC. That's why, with Class B SLCs, T-taps are allowed; no one cares if the wires work (wireless fire alarm systems don't have wires), they only care that the devices stay connected to the panel.

To perform the continuity check, the panel runs a small electrical current through one of the wires - all the way to the end. The current goes through the end of line resistor, and returns to the panel on the other wire.

I have fixed hundreds of buildings with Signaling Line Circuits, some with T-taps and some without T-taps. One thing I have noticed with all of these buildings is that there are no two buildings wired the same way. Even when two buildings look identical on the outside, they are never wired the way on the inside. I have had to guess whether there are T-taps, and then guess to see where the T-taps are located.

I've never had electrical trouble because there are too many T-taps. The frequencies used with signal transmission are always so slow that T-tapping isn't a problem. Unless the manufacturer lists a problem with T-taps (like EST), T-taps aren't an electrical or interference problem.

Because all of the buildings are so different, I don't know if there can be a formula for the number of T-taps, except to say to run the circuits in a logical manner.