What's the Difference between a Smoke Alarm and a Smoke Detector? 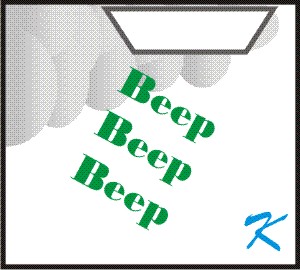 A smoke alarm in a dwelling is a stand-alone smoke detection system. Not only does it detect smoke, but it also sounds the alarm.

Smoke alarms are inside houses, townhouses, apartments or condominiums. In areas that people live and sleep, smoke alarms are there to alert the residents.

Inside the dwelling, usually, they're in the halls and in the bedrooms. They're also on every floor.

They're there to let the people inside the residence know about smoke. Smoke is something to pay attention to because as the smoke gets thicker it can prevent escape, or the smoke may mean fire is on its way.

Out in the halls of an apartment building or a condominium building, and a little different from a smoke alarm, a smoke detector is only part of a Common Area Fire Alarm System.

Of course, when the common area fire alarm panel sounds the alarms, the residents in the whole building hear the alarm.

A Smoke Alarm is a complete stand-alone fire alarm system. When it detects smoke, the smoke alarm all by itself makes enough noise to wake a person from a sound sleep.

Nowadays, the smoke alarms in a residence are connected together so if one smoke alarm detects smoke in the basement, for instance, all of the smoke alarms go into alarm. In the bedrooms on the upper floors, all the alarms making noise will wake up those sleeping and allows them time to escape.