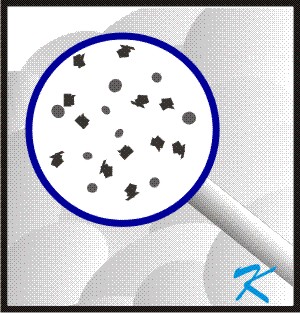 Smoke that we can see is made up of particles in the air. Smoke alarms see these particles and declare that they must be smoke. Having made the smoke delaration, smoke alarms sound the alarm.

When cooking, small particles (sometimes the particles are so small they can't even be seen) can be detected. The smoke alarm (which really isn't very smart) can't tell these particles from the smoke of a grease fire. For people's safety, the smoke alarm sounds the alarm.

Particles in the Air

Smoke alarms are there for people's safety. However, like anything else, smoke alarms have limits to what it can do. Smoke alarms can't tell the composition of particles, and they can't tell what caused the particles to be in the air in the first place.

Smoke alarms can only tell that there are particles in the air, and then sound the alarm.
Check It Out
Check It Out