How Does One Keep Track of All Those Wires?

By only disconnecting one wire at a time from one board a landing it on the same terminal of the other board, keeping track of where wires land becomes easier. 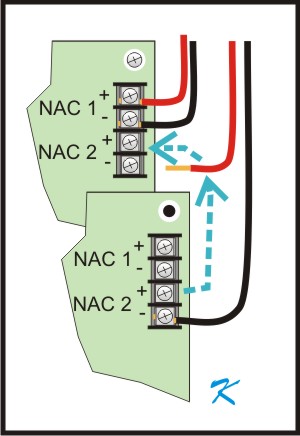 Not having more than one wire disconnected at any time makes it easy to remember where the wire was connected. Landing the wire correctly on the new board is therefore easier.

Changing a circuit board, whether it's in a fire alarm panel, a security panel, a card access panel, or some other panel, can be a potential nightmare if a mistake is made and the wires are mixed up.

Because of the possibility of mismarking them, marking the wires as to which terminal they went to can even lead to errors. (You may be able to do this error free. However, when a mistake is made in labeling, the wires may eventually land on the wrong terminals. This can lead to potential results like burned up circuit boards, non-working field devices, or misdirected firefighters. Problems like this can easily outweigh the pride of error free marking of a large number of wires.)

One method I use a lot, whether it's a power supply, CPU board, or loop controller board, is to move one wire or pair of wires at a time.

For me, remembering a single terminal or pair of terminals on the circuit board is easy. By only disconnecting one wire (or pair of wires) at a time from the old board, I remember which terminal the wire came from so I am able to land the wire exactly on the same terminal on the new board.

Not only that, but by following a progression clockwise or counter-clockwise, it's even harder to forget where one goes next.

It goes without saying, of course, that a picture of how the wiring looked before starting can also help. Remember, however, that often the wire colors are often duplicated, so taking pictures should be a way of verifying, not a way of guaranteeing that the system will be wired correctly.

Before proceeding, the whole panel is to be powered down.

Before removing any wire, loosen up the old circuit board. This involves removing all of the screws and placing them where they won't fall into other circuitry or onto the floor.

Often, from the factory, the screw terminals on the new board come tightened down. So that later one doesn't have to fool around with loosening up these screws while holding wires, it helps to loosen up all the screws on the new board while the board is still in the hand.

Once the new board is in place, the wires can be moved from the old board one wire at a time. Because of the potential of losing the wire in the pile of other wires, or having the wire drop into the wrong place, letting go of a wire as it is being transferred is not an option. Also, if one is distracted during the transfer and has a "death grip" on the wire, remembering which wire is still being held is easy.

(Did I say to power down the board? Yes, but don't trust that procedure to cut all power. There may be residual voltage on a capacitor, the method used to cut power might not completely work, or power may be coming onto the board from other sources that were not powered down. If a wire drops onto the wrong place, it could easily burn out something. Even though it is powered down, always consider the circuit to be hot.)

If two wires have to be moved at a time because they are too short otherwise, the two wires should be constantly held during the transfer so they do not change order left--right or up--down.

Once all wires have been transferred and checked, and the board is permanently mounted, final recheck check is made to make sure of all the connections. Then the board can be powered up and the testing started.

There may be lots of wires to and from a circuit board, but by paying attention to only one wire and only one terminal at a time, most mistakes can be avoided when replacing circuit boards.


P. S. When changing out a circuit board, I do take pictures of the before and after wiring. This may not help so much when there are so many red and black wires, but to confirm that any unused terminals are the same on the new board as they were on the old board, taking pictures before and after helps.
Check It Out
Check It Out