Why Does It Seem that Dry Sprinkler Systems Only Show Low Air Pressure At Night?

It sounds like something that just seems to happen, but the effect is real. At night, the air temperature is lower so it loses pressure. The lower pressure increases the chances of a "Low Air" indication on the fire alarm system. 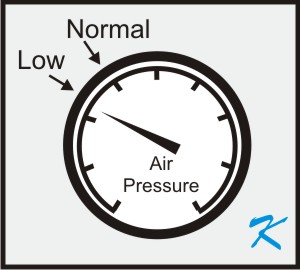 Doesn't it always seem to happen? In the middle of the night, someone's fire alarm fire alarm system sends a supervisory signal to the monitoring company. It's a dry sprinkler system low air signal.

You're a fire alarm service technician, and you're on call.

Turn on the Circuit Breaker

Usually, it's not much that has to be done, but either someone has to go on site or sometime in the near future the dry sprinkler pipes are going to flood. You get dressed, go to another part of the city, flip the circuit breaker back on, do the write up while the compressor fills the air tank, and go home again.

On your way back home you ask yourself, "why does it seem that the supervisory low air signal only occurs at night?"

Well, it's not just your imagination. If you kept statistics, you'd discover that by far, the greatest number of times the sprinkler low air signal is sent to the monitoring company really is at night, usually after 11 PM.

There's a reason for this, and it's not because the sprinkler system has it in for you; it's because of variations in outside air temperature.

It's warmer during the day and cooler at night and the dry sprinkler system is often exposed to these up and down outside air temperatures.

The dry pipe also has small air leaks. All dry systems have small leaks or they wouldn't need air compressors to replenish the air on a regular basis. Both day and night, these leaks slowly let air out of the dry sprinkler system.

I know, there are other causes for the low air signals than just a blown breaker, but that seems to be the most common.

Also, flipping on the breaker doesn't always fix the problem, but if you make enough 2 AM overtime calls, the owner has incentive to get the problem fixed.
Check It Out