What Causes False Alarms in a Sprinkler System?

With most fire sprinkler false alarms, water was flowing. The small jockey pump used to keep pressure in a sprinkler system, when there's no fire, isn't supervised. If it's tuned on for a long enough time, the waterflow switch could sense an alarm. 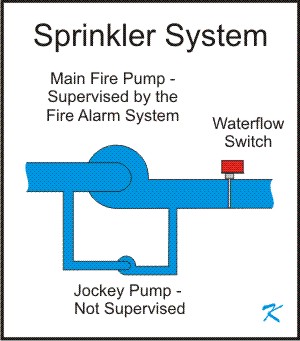 It was 8:00 o'clock at night, and there I was standing in front of the fire alarm panel.

The fire department had already been there and left, but because of waterflow issues, this was the fourth night in a row the firefighters had turned up at this 6 story downtown department store. Each time, when they arrived, the pressure gages on the sprinkler system showed everything was normal, and the fire pump didn't even seem to have been activated.

Because the sprinkler system was always normal, the store management thought the fire alarm panel caused all the hubbub. I was on-call, so I was the one handling this false alarm problem. On visual examination, when I got there though, the fire panel seemed normal.

What was I to do?

The only clue I had to go on was that the false alarms always occurred in the evening.

I knew if the false alarms were caused by the fire alarm panel, they would have been at random times throughout the day rather than occurring just in the evening. It therefore thought the problem might be in the sprinkler system.

Now I'm a fire alarm technician and not a sprinkler fitter (I make messes).

I had to be able to tell the management where the problem was. But then, I also knew that just telling the store management to call the sprinkler company wouldn't have solved anything, and the management, at that point, would have thought I wasn't even willing to fix the fire alarm system (bad juju).

In order to figure out what was happening, I went down to the sprinkler room.

This was an older sprinkler system, without means of logging anything about the fire pump, so checking the pressure history was not one of my options.

The system had 5 risers, one fire pump, and a jockey pump, all in a roughly standard configuration. With a visual inspection of the meters showing nothing out of the ordinary, all I could do was walk around the room and observe. Actually, I walked and observed for quite a while.

I Had Stumbled on the Cause of the False Waterflow Alarms

In this case, as the water trickled out into the floor drain, the pressure decreased slowly.

But why do the false alarms occur in the evening? Another factor to consider is that as the building gets cooler at night, the air in the sprinkler system compresses, reducing the pressure further.

The reducing pressure of air bubbles, with the water leak and the pipes getting cooler, was causing the jockey pump to start so it would replenish the pressure. Because the air bubbles were large, the jockey pump pushed water past the waterflow switches for a minute or two, causing waterflow alarms.

Of course, the jockey pump operated and pushed water past the waterflow switch for only a short time, and when the firemen got there, the pump would be finished so everything would seem normal.

I Could Go Home