Why Don't All of the Smoke Detectors Act the Same?

Hope you are doing well. What can you say about the smoke detectors that when activated with solo spray the alarm is received at the panel, BUT the LED lamp is not getting lit continuously?

Normally light blinks every 5 sec. but during the activation blinks every 1-2 sec. or sometimes 2 times in 1-2 secs. And then when the alarm is received at the panel, it is getting back to 1 time in 5 sec.

I was observing the issue and trying to troubleshoot the issue.

The plant is in the pre-commissioning state, so it is actually a live method testing and the logic is working for annunciations and executive actions. I keep the screw terminals open for the Notification Appliance Circuits (NACs) and outputs not to disturb the personnel.

But when testing, not all of the SDs are behaving in the same way, some of the SDs are only generating the alarm in the panel without latching the LED light.

I've checked for ground faults. There was a panel negative earth leakage, but it has been fixed. The Signaling Line Circuit (SLC) power supply polarity of all the SDs re-checked. The panel was re-started.

Unfortunately, some of the smoke detectors are still not latching in alarm.

Thank you, A L

This is the quickest and easiest method of finding problems, the more times you have guessed-and-confirmed, the closer your guesses will be to the problems. That's called experience.

In an addressable system, starting from the bottom up, there are two basic methods of communicating between the smoke detectors and the panel: the Digital System and the Analog System. 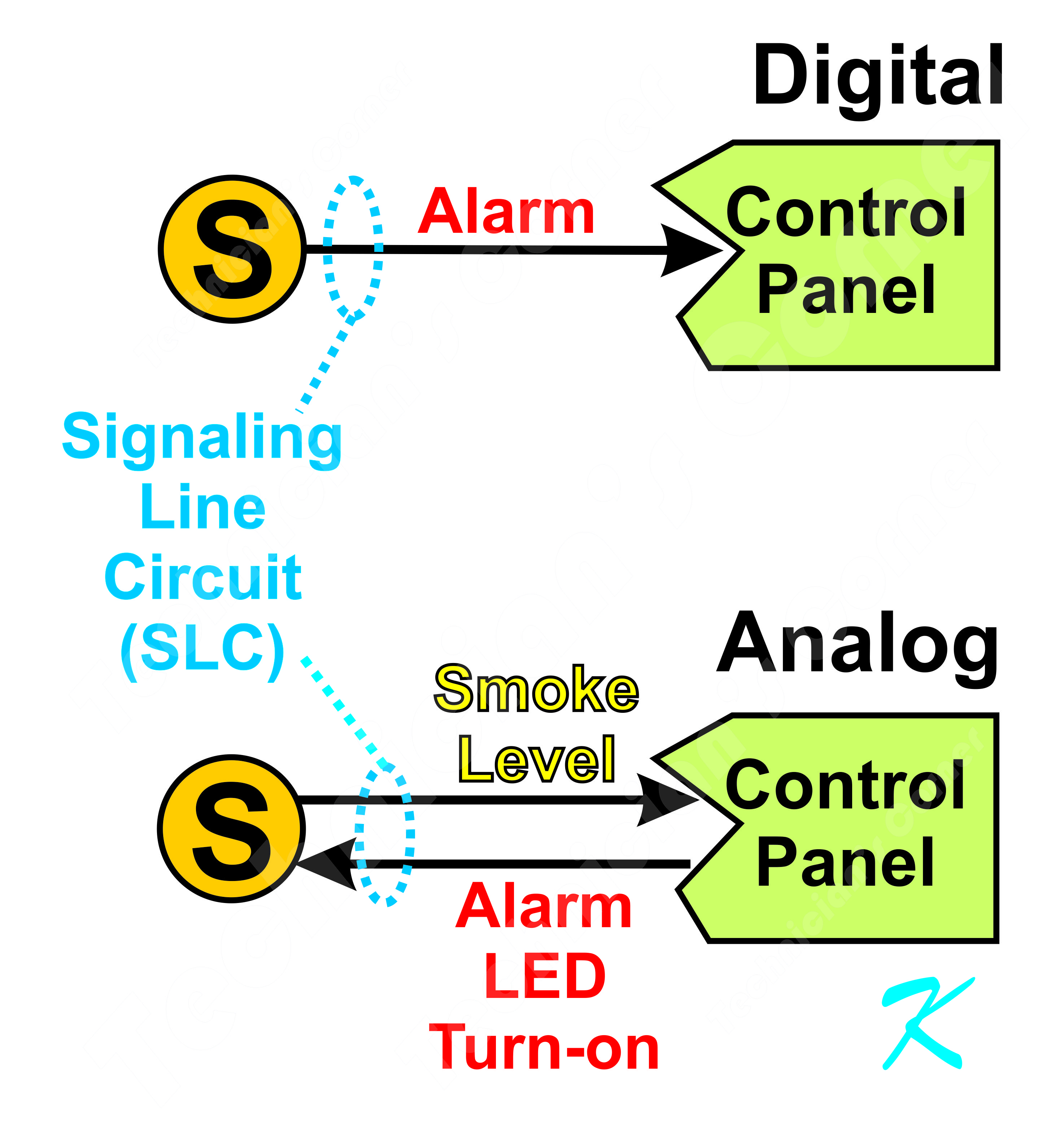 Once it receives the alarm, the control panel then deals with the alarm as an alarm.

The system is referred to as a "Digital" system because in a digital system, the detector sends a digital "Alarm" or "Not-Alarm" signal.

When the panel decides that there is enough smoke, then, and only then, the control panel sends a signal back to the smoke detector to turn on the detector's red light. At this time, the panel also sounds the alarm.

This system is referred to as an "Analog" system because the detector is sending a smoke level signal; the detector is sending a varying length electrical pulse to the panel to indicate how much smoke is present. The pulse is quick (short duration) to say "not much smoke" or maybe slower (longer duration) to say "more smoke". The panel, then, is using the length of this pulse for making its alarm decision.

Verification is skepticism: the smoke detector senses smoke, but the fire alarm system doesn't really believe that it's smoke until it has had a chance to verify.

Once the panel decides that the smoke isn't just going away, the panel goes into full alarm mode.

From your description, it looks like this is an analog addressable fire alarm system; the detectors don't call the alarm, the panel calls the alarm.

This problem is the quickest to test for.

If the issues you're facing are caused by verification, what is happening with the detectors is that you are not getting full verification. This isn't really a problem; this just looks like a problem.

To start with, before spraying in your smoke, the panel is slow-checking all the detectors and modules in the system. During the slow-checking, when the smoke detector tells the panel about the smoke you've sprayed into the detector's sensing chamber, the panel switches to a fast-check of that detector. The panel, at this time, also turns on it's own alarm light, but doesn't take the action of sounding the alarm to the whole building because it is skeptical that this is really an alarm.

During the next minute or so, the smoke inside its sensing chamber is dissipating rapidly. Each time during the fast-check, the panel is asking the smoke detector how much smoke is there, and each time, the smoke detector is telling the panel that there is quite a bit less smoke. When the smoke levels get down to an acceptable level, the panel considers that there really wasn't smoke caused by a fire, turns off its own alarm light, and goes back to the slow-check polling of that detector.

There are other causes of the system not working, but this one is easy to check. First off, is there a lot of air movement around those detectors? If so, after first spraying smoke, wait about 30 seconds and spray again. That will cause the detector to send a signal that the smoke levels are still high, and the panel will at that time sound the alarm.

Even if the air isn't moving very much during the testing, use the double-spray method to test verified smoke detectors. That saves time in the long run.

If its real problems you're finding, and not just the perceived timing problems discussed above, the system can be divided into three areas.

The signals traveling along the communication wires (Signaling Line Circuit or SLC) can be distorted by affects that have been injected into the system.

Some of the troubles can be caused by stray capacitance or inductance on the line. Both of these can affect the wave-shape of the pulses, which affect the pulse lengths received by the panel. In this case, the smoke detector might send a specific pulse length signal, but the Signaling Line Circuit (SLC) could be changing the shape of the pulse, so the panel sees a different length pulse with than the detector is sending.

Another possibility is that a detector, module, or even the panel could be dragging down the total voltage on the SLC, and then the panel perceives a different pulse length than the detector is sending.

I've even seen where problems like this are caused by "soft" wire to wire shorts with water on the circuit. See: How Does One Find a Soft Ground Fault?

The panel could be using too high or too low of voltage on the SLC. I had to replace a loop controller card in a fire alarm system because it's voltage was too high and it wasn't always correctly communicating with the modules connected to the SLC.

Then there could be problems with the programming.
You will have to look at the program on your laptop computer to verify that the inputs are all programmed correctly.

There are a lot of possibilities, and you have to be open to all of them. It's only after eliminating the possibilities, one at a time, that you can really trim them all down to find the cause of the problem.