A place of refuge, a stairwell, or an elevator is a bad place to make a recording, but the recordings have to be made there. To sound good, put your mouth about three finger widths from the microphone and speak slowly and distinctly. 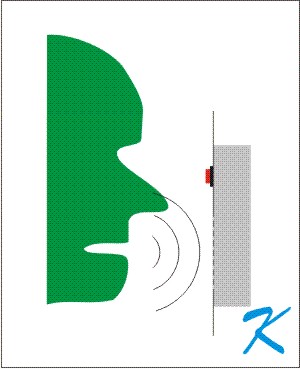 
OK. You've installed a message box in the place-of-refuge or in the elevator, and now you have to use your voice to record the emergency message. The message is to make sure that someone having a real emergency - even though they may be panicking - will be able to correctly get their location across to emergency responders.

When making the recording, there are things to take into consideration.

The person pressing the button:
You have to speak for that person.

Get the Emergency Responders Attention

What makes the message hardest to understand is there are a lot of echoes. In essence the sound of your voice bounces off the walls repeatedly; the accumulated echoes from all this bouncing around are actually louder than your voice. Overcoming the echoes, however, is rather easy.

These recording machines have what's called Automatic Gain Control (AGC). This means that no matter how loud or quiet you talk into the mic, the recorder will always record your voice at the proper volume level.

In order to record your voice louder than the echoes, put your mouth 3 finger widths away from the built in microphone in the message box. Talk loud, loudness doesn't matter; the ACG will adjust the record volume automatically and make a good recording.

The echoes are just as loud as before, but when your mouth is that close to the microphone, your voice is a lot louder than the echoes.

Invent the Script and Stick to It

You, like most of us, don't have perfect recall of what you need to say.

The easiest way to make sure all the information in the message is correct, create a script. Say out loud what is written down several times. Do this before making the recording.

Remember, no one is going to grade you. No one is even going to know (or care) whose voice it is on the recording. All that anyone cares about is that the message is understood in its entirety.

Your job is to make a recording that the operator can understand: