Area of Refuge, What Is It?

An area of refuge is a safe place in a building that someone who can't use the stairs can wait to be rescued. 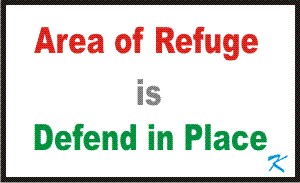 When a person can't navigate the building exits by themselves, in case of fire and smoke, an Area of Refuge is a place that one can go to in order to "Defend-in-Place".

Refuge -- A shelter or protection from danger, difficulty, etc.


Why have an Area of Refuge?

You hear the message "Use the Stairs," you see the sign "In case of fire, don't take the elevator."

To get out of the building from the higher floors, when the building is on fire, the stairs are the only way out. However, some people just aren't physically able to take the stairs. What can those people do, other than seek refuge from the fire?

In a Building, What is an Area of Refuge?

In a building, an Area of Refuge is a safe place designed to protect people from a fire. It's a place for people to wait to be rescued by emergency personnel.

For the rescuers, it's a staging place to keep people safe until they can be evacuated.

Who Should Be Using an Area of Refuge?

Requirements for an Area of Refuge

Free PDF Excerpt from the book

Communications for the Areas of Refuge

To let rescuers know people are waiting in an Area of Refuge, a two-way voice communication system is provided.

There is a Central Control Point which is where the firemen or rescuers first come into the building.

The Area of Refuge protects people from fire and smoke. It is a safe place for people who can't use stairs to wait for rescue.

There are signs to tell everyone about the Area of Refuge, and a two-way communication system to let the rescuers know someone needs help.
Check It Out
Check It Out