What is Mass Notification?

Mass Notification isn't a system so much as an idea. The idea is to get emergency messages out to as many people in an area as possible. This can be through overhead paging speakers, cellphone messaging, voice phone calls, radio, TV, freeway sign boards, etc. 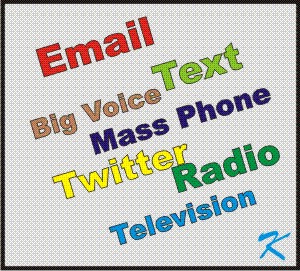 Mass Notification Systems are not specific equipment, they're the method used to get emergency messages out to as many people as possible.

When a disaster or emergency strikes, and everyone in the area is to take action now, a Mass Notification System is a Call-to-Action.

A Fire Alarm System is a type of Mass Notification System; when there is a fire, it calls the evacuation of a building.

On the other hand, a Mass Notification System calls people to action with any impending danger - fire, dangerous weather, terrorist, tsunami, explosion, or even invasion. In an emergency, it's a means of giving of instructions to a large number of people, all at once.

A Mass Notification System covers a larger geographical area than a building's fire alarm system, like:

Free PDF Excerpt from the book

Not just turning on the fire horns like with a fire alarm system, It gives more instructions. it tells people: In addition to the general instructions, each type of facility - military base, college campus, large hospital, open air arena - has a customized set of instructions.

A hospital, for example, would include in its customized messages: In the above hospital example, pocket pagers and overhead paging systems reach everyone in the hospital. Just to make sure the security department sends out more detailed directions.

The general public, however, isn't so easy to reach.

A Mass Notification System is flexible; it covers any disaster and instructs people about what to do. To get an emergency message to almost everyone at the same time, it is a coordination of many individual communication systems.

Free Excerpt: The chapter titled "Troubleshooting - Look at What the Panel is Looking At" Save the PDF to your files

Free Excerpt: The sections titled "Addressing" - - "Power Supply" - - "For Troubleshooting, What is an SLC?" Save the PDF to your files