What Is Fire Alarm Trouble Power?

Trouble power is a secondary power source that a fire alarm panel can use if its primary source of power is lost. Originally, it was a second power entry into a building, Nowadays, because the fire alarm systems are solid state and not a panel of relays, backup batteries are used instead. 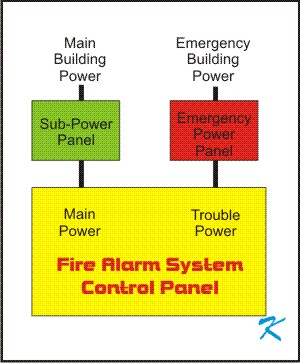 In the "Old School" type of fire alarm system, before the smoke detector was invented, even though the fire alarm systems used AC, all voltages were in a steady state: either on or off. Until someone threw a switch (manual station), the power to the fire bell stayed off.

At this point in time, because the fire alarm systems used power line AC voltages, batteries couldn't be used as a standby power source.

IDC as a Turn-On Circuit

On the Initiating Device Circuit (IDC), all input devices were just on/off switches; when there was a fire, the glass was broken on the manual station and a push button switch popped out, turning on the power to the fire bell.

But, what told anyone when a wire broke or a connection came loose? A broken wire would effectively disable the fire alarm system --- this would be bad.

In case a wire broke or a connection came loose, the wiring to the manual station and the bell had to be monitored for integrity; it had to be supervised. This was accomplished using a trouble relay inside a centrally located fire alarm control box.

So it could supervise all the wiring, the trouble relay coil was wired in series with the switch and the bell. Across its contacts, the manual station switch had a resistor allowing enough supervision current to bypass the open switch and keep the relay energized.

The resistor, though, was high enough in resistance to keep the supervision current down so the bell wouldn't sound.

A few of the old AC only fire alarm systems are still in use, but newer fire alarm panels (half a century old is considered new by some standards) have a standby battery system instead of a separate trouble power source.

In case a wire breaks or power to the main panel is lost, this standby battery system is not only used to keep the trouble light and buzzer (sounder) operating, but when there is a power loss to the building, this battery (always kept charged by the fire alarm control panel) keeps the whole fire alarm system operating.
Check It Out
Check It Out