What is Class N Power Over Internet (PoE)?

What is Power Over Ethernet (PoE)

For the equipment at the end of the cable, PoE or Power-over-Ethernet is power carried by the extra pairs of conductors in a copper wire data distribution system (CAT 5 or CAT 6).

However, PoE isn't new. It's already used for security cameras, LED area lights, small computer controllers, etc. In fact, PoE is used so much now that it's considered reliable enough for fire alarm systems. That, of course, is when it's properly installed.

It's the properly installed part that becomes the important disclaimer because data distribution systems, including servers, computers, routing equipment, signal carrying networks, all the power equipment supplying the data system have become part of the fire alarm system. Included is the Uninterruptable Power Supplies (UPS) that now have be installed with the life safety / property protection fire alarm system in mind.

In other words, for fire protection, during the IT (Information Technology) department's software updating an rewiring, and during a full 24 hour power blackout, everything has to be reliable and continue to operate. This will require working with (not against) the manager of the IT department.

Overall in a building, the Ethernet consists of the wire and support equipment used to distribute data. It's used in most building-wide data distribution systems and it's the current standard method for the end point data communication system. Unless Wi-Fi (wireless communications) is used, the most common method of getting data back and forth between the local server and computerized equipment is Ethernet wiring.

Power over Ethernet for fire alarm systems is part of the Class N signal path. As such, the data cables and support equipment aren't supervised. The panel doesn't check to see if the signal path itself is always complete. 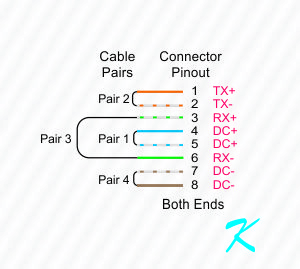 Using a 4-pair cable, Category 5 and Category 6 cable is a high-speed data transfer system. From the outside, the wire looks like 4-pair telephone wire in a round jacket. However, because of the high-frequency data traveling through the wire, the pairs have to be very tightly twisted.

Nowadays, most laptop computers automatically configure their network data port to receive data on either pair 2 or pair 3, and then use the opposite pair to transmit data.

Used to run remote electronics, PoE carries in the electrical power. It conveys the electricity over the otherwise unused conductors (pairs 1 and 4) of CAT 5 or CAT 6 Ethernet wiring.

Usually in the data closet where utility power is present, the needed electrical energy is injected into the cable. The injected power, though, is not a single source building wide power distribution system, PoE is only used carry power over the last leg of the Ethernet, like from the data-closet to a single device in the field. 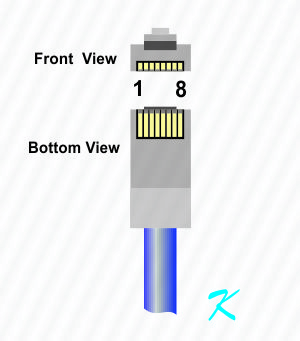 Power Added to the Data Cable - One Common Method

There are some standards for incorporating the electrical power into the PoE cable, like using pins using pins 4 & 5 for positive and 7 & 8 for negative or using the positive and negative power on the same pairs as the data (like phantom power for microphones), but especially with fire alarm systems, PoE is proprietary in nature and each manufacturer will require different pinouts.

In life safety systems, each manufacturer does not want to be held liable for damages when another manufacturer's equipment is added, but not certified to be safe. Basically, when working with PoE for fire alarm systems, assume that all manufacturers are proprietary and require only their equipment to be used. Anyone else's equipment won't work. 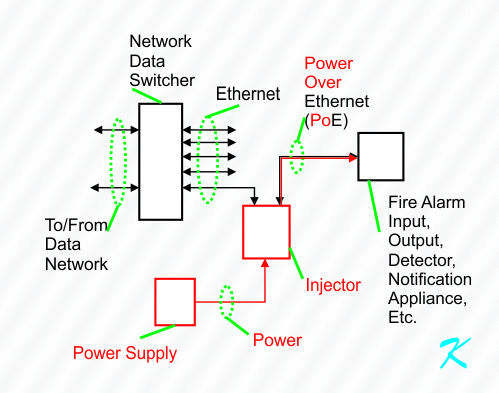 The CAT 5 and CAT 6 Ethernet cables can only be 100 meters long, including patch cords inside the data closet and drop cords to the computers or the other devices. That leaves more like 90 meters or so to work with, or 300 feet of cable for the building structural wiring.

Usually, the electrical power is not provided by the data switching equipment, but it is injected into the cable with a close-by power injector.

For fire alarm system equipment, the power injector is connected to a 24-hour UPS or a fire rated power supply.

To get power to the devices, if the fire alarm manufacturer isn't using conventional Class A, Class B, or Class X wiring techniques, PoE is an easy method to use.