Is the NFPA Code the Law or a Recommendation?

The NFPA shows how to design, build, and maintain a fire alarm system. The NFPA, though, is a non-profit organization. Governments use the NFPA as their law, and governments can and do enforce the NFPA Code. 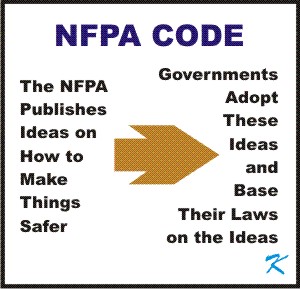 The NFPA can't make rules or laws that we have to obey; the National Fire Protection Association (NFPA) is a citizen run organization.

In the United States, the National Fire Prevention Association (NFPA) fire codes are strange. They aren't codes; they're recommendations -- the NFPA has no authority.

They all receive their ability to make the rules that we live by from the Federal Government. The regulations that come down from these bodies overrule anything that could be handed down by local authorities.

Sometime near the end of the 19th century, before the federal government started making rules and regulations to make things safe for the populace, some people got together to figure out some fire safety suggestions and recommendations.

These suggestions were made particularly because of new protective sprinkling systems and the hazards of the then new electrical wiring, but as the years passed these suggestions included other fire hazards.

Under the NFPA, they provided a fairly compete set of recommendations on how to accomplish fire protection.