People depend on things working. If a smoke detector, for instance, is a fake, people think that they're protected. Then, if a fire occurs, there's more damage, and possibly even injury to people that thought they were protected. 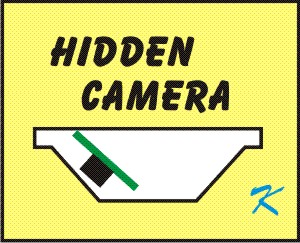 Placing a false smoke detector in an area to hide a camera does keep the camera hidden. But there are problems with this practice.

Whether its smoke detectors on the ceiling or the firefighter's telephone system, people think that if it's there, it's real and it works. Sometimes, people even stake their lives on that device or system.

If a smoke detector doesn't work because of a malfunction, or worse, if it's a fake smoke detector put there to contain a hidden camera, people who are depending it won't get the help they need in an emergency.

For people' life's sake, any smoke detector on the ceiling has to function and be real ---- and, in an emergency, it has to detect smoke.

Here, a smoke detector is referred to as "protecting an area".

Even though a stand-alone smoke detector itself does not protect, as part of a complete fire alarm system, it is part of the protective services to the building and is being used to help "protect the area".

If a telephone system doesn't work because of a malfunction, or worse, if it's just turned off because no one thinks it's needed anymore, firefighters, staking theirs lives on it, won't get the help they need in an emergency.