If It Aint't on Paper - Did It Happen? 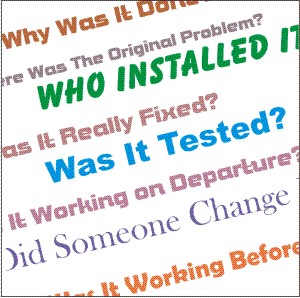 Answers to these questions don't mean anything now, but in the future there might be a chance someone will want to know.

At the time you did the work, showing on paper that you installed, repaired, or tested parts of the fire alarm system helps those in authority know you properly did the installation, repair, or testing.

The Fire Alarm System is a Life-Safety System

Fire alarm systems are there to protect property and to save lives.

Basically, when there's been a fire: When people's lives are at stake, writing down what you did at the time of installation or service may be just the thing to show you tested things out.

Memory isn't good enough; after a couple of years, you need paper to verify what you did.

For those in authority:

When there's no problem with a fire alarm system, no one cares to even look at your paperwork. Everything you've written down you can expect to go into a file at the shop and then disappear; never to be looked at again.

On the other hand, when the building has major damage from a fire, or even worse, when someone is injured or dies, that's when what you have written on paper suddenly becomes extremely important.

Basically, if your paperwork from months to years before doesn't show that you installed, repaired, or tested parts of the fire alarm system, how do the authorities know you did it?

Write It Down at the Time

Once something goes wrong, scratching your head and trying to remember something you did last year is not what those in authority want to hear. Looking at what you wrote down at the time is what they can count on.

For the fire marshal, for the insurance company, for the county attorney, if it ain't on paper, it didn't happen.
Check It Out
Check It Out