When a New Air Diffuser is Installed, Why is the Fire Alarm Company at Fault? 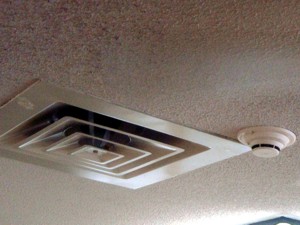 When the HVAC Air Diffuser is placed next to a smoke detector, the air coming out of the diffuser keeps any smoke in the room from reaching the detector.

I was at a lunch meeting where the State Fire Marshal (AHJ) was speaking. One of the things that he talked about was the spacing between an air diffuser and a ceiling smoke detector.

It seems unfair, fire alarm people being told to move their smoke detector because of someone else's action, but there is a reason for this unfairness.

Keep in mind, that the HVAC people don't really know the spacing requirements for smoke detectors. If they're told to move the air diffuser, they aren't going to know where to move it.

On the other hand, to keep the proper spacing, the fire alarm installer knows where to move the smoke detector.