What Makes the EOL Resistor so Important?

An EOL or End of Line Resistor is used to complete a circuit. The circuit needs to be completed to pass the continuity-testing electricity through all the wires of the Class A or Class B circuit. If the electricity stops flowing, a trouble is displayed on the panel. 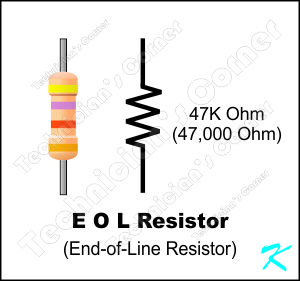 The End-of-Line resistor is an ordinary resistor. It's purpose is to complete the circuit so the panel can perform a constant continuity check.

To allow the panel's internal ohmmeter to check the continuity of the wires (supervise the wires), the end-of-line resistor is at the end of the loop: the last device.

Fire alarm systems are simple systems. They have to be simple. Remember -- the more complicated a system, the more there is to go wrong.

Like turning on a light switch, a very simple fire alarm system is where the input wires start conducting. Basically, the switch (pull station, heat detector, waterflow switch, etc.) turns on the fire horn. This is a simple system that works reliably, at least as long as everything is connected properly.

If a screw comes loose from a pull station, will anyone notice before a fire breaks out? The loose screw means that pulling the lever on the manual pull station doesn't do anything. Once there's a raging fire, it's a little bit late to troubleshoot and fix the wiring issue.

Then again, if between the control panel and the fire horn, a wire breaks, until the building is burning and smoke comes under a closed door, who's to know. At that point in time, it's also too late to get out.

Continual Testing of the Continuity of the Wires

A fire can break out anytime. The trouble is, using an ohmmeter, no one is going to spend 24 hours a day 365 days a year making sure the wires are always connected to all the input and output devices.

The fire alarm panel has to do this.

Making sure the wires are always connected and not broken, the fire alarm panel is always checking the continuity of the wires. By sending a small current through the wires, it's supervising them.

If the current stops, the panel turns on its trouble light and buzzer. This is how the owner of the building can see there's a problem.

Because the trouble buzzer comes on before a fire occurs, the problem with the wiring can be fixed. Now, when a fire breaks out, the fire alarm system will let people know.

We still have a current limiting issue. The pull station fully turns on the electrical current. This is how the fire alarm panel finds out about a fire -- full current to the panel means fire.

To prevent false alarms while monitoring the wires (supervise of the wires), we can't fully turn on the current or we get a false alarm. Somehow, we have to limit the current to a bare minimum, allowing just enough current to show the panel's ohmmeter that the wires are good.

That's where the end-of-line resistor comes in. The resistor limits the current to a bare minimum so the panel doesn't think it's detecting a fire, but at the same time it allows the panel to confirm that current is flowing through all the wires.

To make sure all the wires are supervised for continuity, the end-of-line resistor has to be installed at the end of the line -- so the electrical current will go through all the wires.

Of course, to allow the panel's ohmmeter to check the continuity of the wires for the horns, we can't just twist the wires together at the end; we have to install a resistor there also: to limit the current so the wires aren't just shorted together.

Because fires are anytime, all the wires in the building are always supervised (checked for continuity). Without causing a false alarm or shorting out the horns and strobes, the end-of-line resistor is there to allow the fire alarm panel to continually test (supervise) the wiring.
Check It Out
Check It Out