What Happens When a Fire Alarm System is Tested?

A fire alarm system is supposed to detect fire and warn people of the danger. When testing, though, often times parts are disabled while testing other parts of the system, like disabling the horns while some of the detectors are tested, just to cut down on the occupant's annoyance. 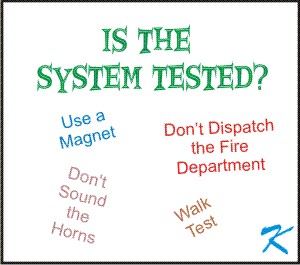 Disabling parts of the fire alarm system for testing means that the disabled parts aren't tested. Just for practicality however, some parts have to be disabled. If too much is disabled though, all that's really being tested is blinking lights.

Once in a while, I can completely inspect a fire alarm system. This kind of inspecting can't be done very often. Usually to perform the inspection, something has to be disabled.

The only way that a fire alarm system can be accurately tested is to try it. That means: Just to make sure everything works correctly, this procedure is repeated for each and every input device. To totally inspect the entire fire alarm system, that may be the real method, but it's unrealistic. (For instance, try doing all that in a large hospital.)

During an inspection, by performing a fire drill, the part about the occupants leaving the building can realistically be done only once. After that, people aren't appreciating the inspection. And of course, the fire drill can be performed only if the owners of the building decide they want a fire drill.

On-Test with the Monitoring Company

With every inspection, the part requiring the firefighters to arrive is disabled by putting the system "On Test". The monitoring company is told that when they receive an alarm they don't dispatch the firefighters. (When there's no fire, the arriving firefighters seem to get so annoyed.)

Even fire marshals, making sure their dispatchers get the alarm, don't make the firefighters arrive.

How much is disabled beyond that is a balance; it's a balance between an unreasonable total testing and not really testing the system.

To make sure they detect what they're designed to detect, input devices have to be tested.

Pull stations need to be tried to make sure that pulling the lever will activate the pull station and that the fire alarm panel goes into alarm.

Smoke detectors (which are really particles-in-the-air detectors) need to be tested to make sure they detect particles in the air and they put the fire alarm panel into alarm.

The Notification Appliances (horns, chimes, speakers, strobes, etc.) need to be checked to make sure that when the fire alarm system control panel goes into alarm, they sound (make lots of noise) or light up. Also, the Notification Appliances need to be looked at individually to confirm that no one has blocked them with shelving or put tape over them to prevent disturbance.

Often, during the inspection, the circuits for the horns and strobes are disconnected or disabled. It's a balance though, between testing the fire alarm panel's programming and its load capability, versus not riling up the occupants.

Disconnecting the circuits will prevent one from seeing that when all devices are attached, the panel is programmed right, and it doesn't overload. But hearing the full evacuation all day gets people annoyed and soon they ignore the evacuation.

This is a conflict. Unless the system as a whole is inspected, how does anyone know if the fire alarm system works?

In other words, with most panels, walk testing doesn't really test the panel's internal alarm rules. Too much is disabled in walk testing to know the whole system actually works. If possible, don't walk test.

Keep in mind, when inspecting to see if the life safety fire alarm system is working, the more that's disabled; the less that's tested.
Check It Out
Check It Out