Why Use a Cheap Meter when an Expensive Meter is Better?

Because the voltages of a fire alarm system are nominal, and not regulated, even a small cheap meter will be as good as a large expensive meter. Being small, a cheap meter is easy to carry at all times, being cheap, if it's broken or stolen, there's not much loss. 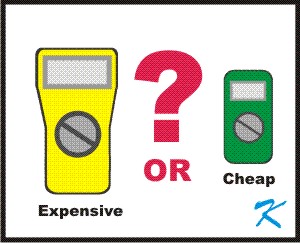 The question isn't which one is more accurate. Most of the time, accuracy isn't needed. The question is which meter can be carried at all times, even when one can't foresee the immediate need?

Like a doctor always carrying a stethoscope, so should a technician always carry a multimeter.

Just in Case it's Needed

A good multimeter is rugged, has all the possible functions needed at any time, and provides accuracy. But, besides the cost of the initial investment, there's another price to pay; it's too big to put in a pocket or a belt pouch. And much of the time, it's not needed, after a while it becomes just another cumbersome tool that can be left behind until needed.

Leaving the meter behind means, when the unforeseen need arises, the high quality multimeter might not be immediately available.

Small --- Not Accuracy is the Important Part

Small, of course, is the important part. It's not the accuracy, it's not the total number of functions, it's that the multimeter is with the technician. In a pocket or in a belt pouch, when the technician isn't carrying much more than a pocket screwdriver and multi-tool (like a Leatherman or Gerber), it's ready to be used.

Yes, having a good, high quality multimeter available to the technician will give the accurate measurements needed once in a while. But for most measurements, having any meter at all is far better than going back for the good multimeter.

Remember, maintenance/management people, the ones that are paying-by-the-hour to have you on site, are watching. Having tools with you that can be used without the down time of retrieval is what they're looking for.

Carry the Meter at All Times

Carrying the stethoscope at all times gives the doctor a good starting point for checking the status of the patients. For the few times more precision is needed to diagnose heart conditions, the cardiograph is available to the doctor.