When the air in a hallway doesn't move very much, and the smoke is cold and heavy, the smoke might not penetrate the warm air blanketing the ceiling. Until the smoke can push through the warm ceiling air, the smoke doesn't reach a smoke detector at the ceiling. 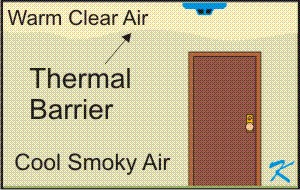 When there's little or no air movement, hot air tends to rise up and cooler air tends to go lower. Smoke adds weight to the air, and if the smoky air is cool enough, it won't push it's way through the warmer air above to get to the smoke detector.

The NFPA wants smoke detectors tested in place to make sure smoke enters the smoke chamber. Keep in mind that a smoke detector can't detect smoke that doesn't get to the detector.

This may not sound like a problem, but if the air is stagnating, it will stratify and a blanket of warm air will hug the ceiling.

When the smoke is heavy or cold, this becomes an issue. The heavy or cold smoke will not pierce the thermal barrier between the lower cool air and the higher warm air at the ceiling. Because the smoke can't get to the smoke detector at the ceiling, the hall can be "full of smoke" and still not activate the fire alarm system.

On the other hand, air can be moving too fast. In this case, fans, air conditioners, supply air registers, return air registers, etc. can be the culprit. These prevent smoke from getting to the detector in the first place, at least until the whole room becomes a smoke filled chamber. Even if the air diffuser is 20 feet (approximately 6 meters) away, air from the diffuser can prevent smoke from getting to the detector.

Air handlers under the window in hotel rooms can affect a smoke detector on the far side of the room. Just finding a place for the smoke detector without this cleansing wind from the air handler can be a problem.

Computer rooms, where the HVAC systems are causing high velocity wind, are another place that, until the whole room is hazy, the smoke detector can't detect smoke.

Remember, to make sure smoke enters the chamber of the smoke detector, the NFPA wants the detectors tested where they are located. They want to test whether the detector will detect real smoke from a real fire.

The sensitivity tester doesn't show if real smoke from a real fire gets to the smoke detector.

Most of the time, smoke detectors will work as they are supposed to. Once in a while, though, conditions exist where, even though they have been tested to work with both sensitivity testing and function testing (canned smoke), smoke detectors don't detect real smoke.

Sometimes, to see if a smoke detector will actually receive and detect smoke "where-they-are-located", I think that the only way of properly testing is to start a campfire in an apartment building hallway, roast some marshmallows, and see what happens... but I wouldn't recomend it.
Check It Out
Check It Out